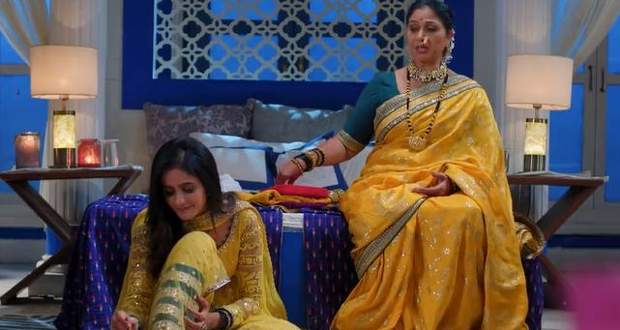 Bhavani further asks Karishma and Pakhi to apply the Alta on Sai's feet while Pakhi stops her but Karishma forcefully tries to apply it.

Meanwhile, the Alta vessel breaks and Bhavani senses trouble as it is a bad omen. At the same time, Devyani comes there and keeps her feet in the Alta while she says that she is also a Suhagan which surprises the other ladies.

Further, Sai asks Bhavani if Devyani is speaking the truth that she is already married while Bhavani asks Sai not to interfere in Devyani's matter.

Simultaneously, Devyani refuses to tell the name of her husband as it is harmful to him while Sai feels suspicious about it.

Meanwhile, the Chawans rebuke Sai and Pakhi also instigates the family about sending away Sai from the Chawan Nivas.

Later, Ashwini brings a saree to Sai while Sai says that she will wear Alta for Ashwini's happiness.

In addition to that, Sai says that Pakhi and Virat love each other while Ashwini disagrees with her. Further, Ashwini gives Sai a piece of advice.

In addition to that, Ashwini tells Sai that Virat loves her and cares for her very much.

Upcoming Gum Hai KisiKe Pyaar Mein episode update: Chawans insist to Virat on leaving the house with Sai or sending Sai away from the house.