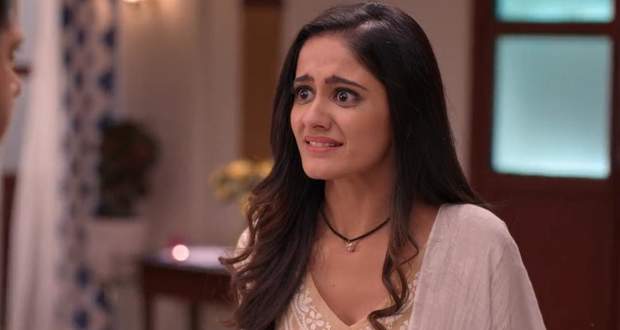 Virat says that he will come home before Holi and disconnects the call while Madhuri keeps calling Sai.

Sai hears the car horn and goes outside to Madhuri thinking that Omkar and Ninad have gone out.

Sai asks how they will follow them while Madhuri says that she put the live location on her phone and kept it in the car.

Ashwini sees Sai going and wonders where she is going.

Sai and Madhuri are standing at the roadside while her college friend Milind comes in the car and asks them why they are standing them.

She gets in his car with Madhuri saying that Pulkit is in danger while telling him to follow Omkar's car.

Ashwini calls Sai but she doesn't pick it up after which she does to Bhavani and reveals about Sai going somewhere with a lady.

Bhavani calls Ninad and tells them about Sai after which Omkar stops the car to see if Sai is coming after them.

However, Sai sees that their car has stopped and Milind stops the car too.

Omkar says that the back door is not properly closed and they stop after which Ninad opens the back seat to properly close it while Madhuri's Phone falls from the car.

Sai's car reaches the place where the phone is kept and wonders how to reach Pulkit.

Ninad and Omkar confront Daadu and find out that someone else has ticked them while they realise that it might have been Sai.

Sai tells Madhuri to go home with Milind and goes into the forest to look for Pulkit.

Sai gets a call from Virat and he talks with her while he informs her that he is returning home the next day.

She says that she is stressed while he tries to make her cheer up.

She sees a tree and disconnects the call.