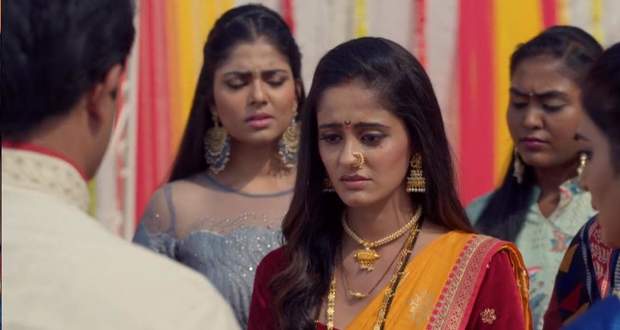 Today's Gum Hai Kisi Ke Pyaar Mein 27 November 2020 episode starts with Virat revealing the motive of his marriage to Pakhi. He asks her to understand him and to support him in this tough situation.

Pakhi taunts him for being like all other guys, while Virat gets emotional and says that one day she will definitely get to know that she is her first priority.

Mohit makes a call to Bhavani and tries to tell her about Virat’s marriage. Virat takes Mohit’s phone and starts talking with Bhavani in a casual way.

Virat requests Mohit and Karishma to not to tell anyone about his marriage. Further, Virat tries to console Sai for facing difficulties because of him.

Sai asks him to apologise to Pakhi for breaking his promise, while Virat says that he has not broken any promise and Pakhi understands him very well.

Pakhi arrives there to call them for lunch, while Virat introduces Pakhi and Sai to each other.

Sai gets emotional on thinking about her Aaba and asks Virat and Pakhi to leave her alone for some time.

Later, Sai’s Vidai ceremony takes place and she refuses to come back to Garchiroli. She blames her well-wishers for sending her away from her Aaba’s house.

Virat requests Usha to accompany them to Nagpur but Sai behaves rudely with Usha and refuses to take her along with them.

© Copyright tellybest.com, 2020, 2021. All Rights Reserved. Unauthorized use and/or duplication of any material from tellybest.com without written permission is strictly prohibited.
Cached Saved on: Saturday 16th of January 2021 03:14:19 AM