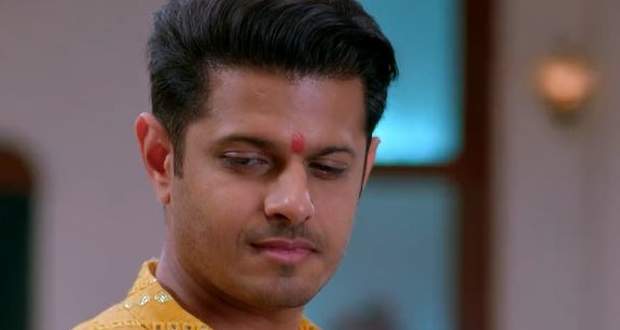 Today's Gum Hai Kisi Ke Pyaar Mein 29 January 2021 episode starts with Bhavani and Pakhi complaining to Virat about Sai that she is trying to turn Virat against the family by applying Alta after creating a scene.

Meanwhile, Ashwini says that Sai agreed to wear Alta when she told her about its importance in Virat's long-living. Later, everyone sits for the Pooja while Sai prays for Virat's health and at the same time, Virat gazes at her.

Further, Bhavani asks Pakhi to do the Abhishek but Ashwini tells Virat and Sai to do the Rudra Abhishek as it's their first Basant Panchami together.

Pakhi burns with jealousy when she sees Virat and Sai performing the ritual together. Later, the Pandit asks Virat to put Sindhoor for Sai while Ashwni prays for their togetherness.

Later, Virat gets impressed by Sai as she applied Alta for his long-living while Virat sees and adores her when she is sleeping.

Meanwhile, Virat learns that Sai is allergic to Alta after Sai wakes up. On the other hand, Pakhi feels insulted by Sonali's words when she said that Pakhi's rights are given to Sai in Samrat's absence.

At the same time, Virat goes to the Kitchen to get baking soda for Sai's allergy while Ashwini says that Sai is still hungry and asks him to take food to her room.

Later, Virat sees Pakhi crying on the balcony while she taunts Virat that he abandons Pakhi. Simultaneously, Pakhi asks Virat if he loves her.

Upcoming Gum Hai KisiKe Pyaar Mein episode update: Virat treats Sai's allergy while he questions Sai that she loves him or not.

© Copyright tellybest.com, 2020, 2021. All Rights Reserved. Unauthorized use and/or duplication of any material from tellybest.com without written permission is strictly prohibited.
Cached Saved on: Tuesday 2nd of March 2021 08:49:01 AMCached Disp on: Wednesday 3rd of March 2021 02:11:19 PM