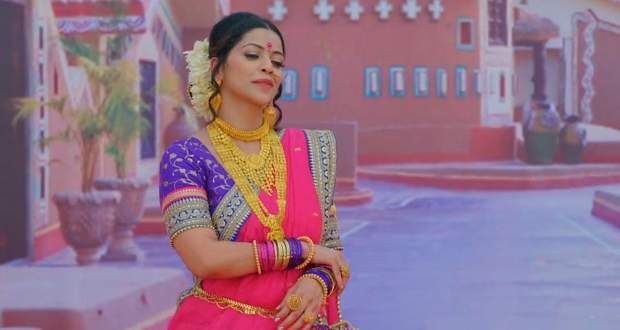 Virat appreciates Barkha's dance while he goes to get water.

Barkha greets the Chavan's and has a conversation while Barkha sees that she is seeing some new faces there that day.

She introduces Pakhi to her and says that she is Samrat's wife while Barkha asks about Samrat.

Bhavani reveals that Samrat has been MIA while Barkha asks about Sai and finds out that she is Virat's wife.

Sai gets a headache while Barkha tells her that someone might have slipped something in her drink.

Bhavani gets embarrassed and tells Ashwini to take care of Barkha as she is their guest.

Elsewhere, Madhuri consoles Pulkit saying that they have made all the marriage arrangements just as Devyani would have wanted.

Sai gets a message from Pulkit while Virat snatches her phone teases her saying that he will see whom she is messaging.

Sai turns away from him and gets tensed while Virat puts her phone in a protective cover and gives it to her.

He turns away and confesses to Sai that he loves her while gets confused seeing her not there.

Sai finds out from Mohit that Sunny had added Bhaang in Bhujiya's and realised why she's getting headaches.

Ashwini and Shivani plan to unite Sai and Virat after which Shivani makes Sai drink a glass of Thandai.

Sai messages Pulkit that she is leaving the house with Devyani in an hour.

She falls into Virat's arms while he tells her that he wants to tell her something but keeps getting interrupted and starts dancing to 'Rang Barse'.

The Chavan's join in and everyone dances while Sai and Virat dance together.