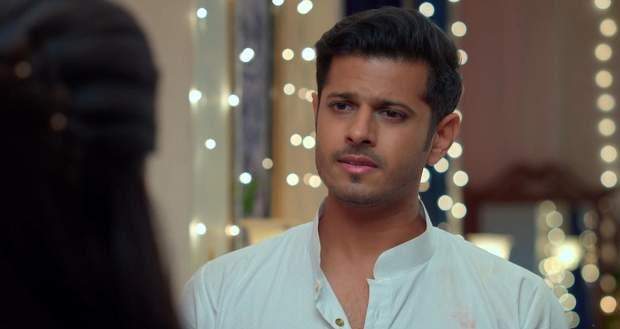 Today's Gum Hai Kisi Ke Pyaar Mein 2 March 2021 episode starts with Pulkit telling Devyani that he might be looking a bit different as many years have passed.

Devyani asks him if he married someone else and has a kid with her while Pulkit reveals that her family lied to her as he can come there to take her.

Shivani tells Bhavani that she is responsible for Devyani's condition and to let her go with Pulkit but Bhavani says that she will not let them be together until she is alive.

Sai tells her to not ruin Devyani's life and to start preparing for her departure.

Ninad gets angry and is about to slap Sai while suddenly Virat comes there and stops his hand in mid-air.

Virat berates Ninad after which Pulkit reveals to him that he is Devyani's husband and is here because of Sai's help while revealing that he is her PD sir.

Virat asks Bhavani if it is true while she denies saying that she wouldn't have hidden this from anyone if it was the truth.

Devys I suddenly remember her marriage and reveals that they were married while telling Pulkit to not come near her as they will harm him.

Pulkit tells her to not worry and that she is his wife so he won't let anything happen to her while Devyani reveals that Bhavani gives her medicine which makes her sleepy and feels alone.

Pulkit assures her that he will keep her happy and will always stay together with her.

Ashwini and Shivani encourage Devyani to inch closer to Pulkit while Bhavani tells her to not go near him.

Virat confronts Bhavani saying that it doesn't matter if Pulkit's father is rich or a servant as Pulkit has made a name for himself in society.

Virat is disappointed in his family while the family starts blaming Sai for causing drama.

Ashwini asks Pulkit if he wants to take Devyani with her today? Devyani tells him that they will kill us if I go with Pulkit.