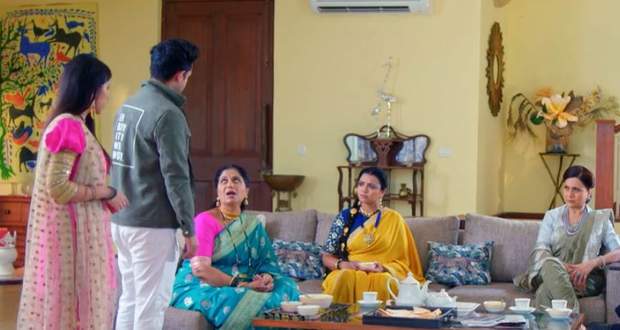 Devyani gets hyper and reacts rudely by throwing things at her.

Pulkit gets worried and calls Sai for help and to calm Devyani down.

At Chavan’s mansion, Bhavani and Sonali blame Sai for bringing down Chavan’s reputation.

Later, Mohit gets furious as except Ashwini everyone humiliates Sai.

Mohit asks Omkar if he cares for the family then why did he act miserably with Pulkit.

Virat calls Sai but she refuses to accept it. Later when she meets Devyani she accepts Virat’s call.

Virat gets happy but when he questions Sai about her well-being Sai cuts the call.

Further, Sai explains Harini that Devyani is ill and she should take care of her. This makes Harini furious and she slams the door on everyone.

Upcoming Gum Hai KisiKe Pyaar Mein (GHKPM) episode update: Sai misses Virat as she knows that he has gone on a dangerous mission.

© Copyright tellybest.com, 2020, 2021. All Rights Reserved. Unauthorized use and/or duplication of any material from tellybest.com without written permission is strictly prohibited.
Cached Saved on: Friday 28th of January 2022 04:56:00 PM