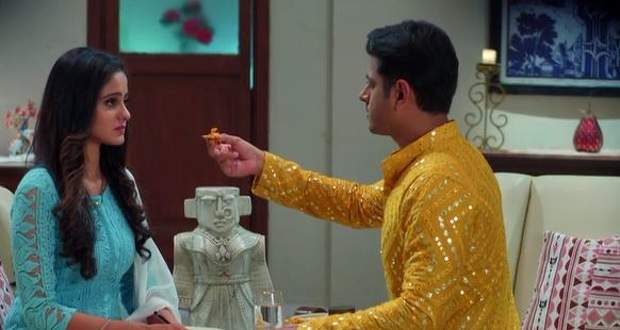 Today's Gum Hai Kisi Ke Pyaar Mein 30 January 2021 episode starts with Virat telling Pakhi that everyone loves her in the family while Pakhi asks Virat if he cares for her.

Later, Virat says to Pakhi that everything gets to normal once Samrat comes back while Pakhi tells that she has no hope for Samrat's arrival.

Virat further asks Pakhi to be strong to which Pakhi says him to go to his room and leaves.

Meanwhile, Sai is studying in her room and Virat brings her the food. Later, Virat sits beside Sai and treats her allergy with a lot of care while Sai feels moved by his act.

At the same time, Virat tells that Ashwini has sent baking soda and the food for her and Sai feels very blessed for having such a caring mother-in-law.

Later, Sai says that she loves one more person in the house while Virat gets excited that she will say his name but when it turns out to be Devyani, Virat gets irked.

Virat further asks Sai whether she loves him which makes Sai feel amazed but she answers very funnily that it would be in his dreams.

Meanwhile, Sai gets very emotional when Virat feeds her food, she cries out. Virat says that he likes feeding her with his hands.

When Sai says that she applied Alta only for Ashwini then Virat tries to pull her leg and creates a funny scene to which Sai reacts cutely.

Later, Virat asks about Aniket all of a sudden while Sai questions him about seeing the police at her college. Virat cleverly manages the situation.