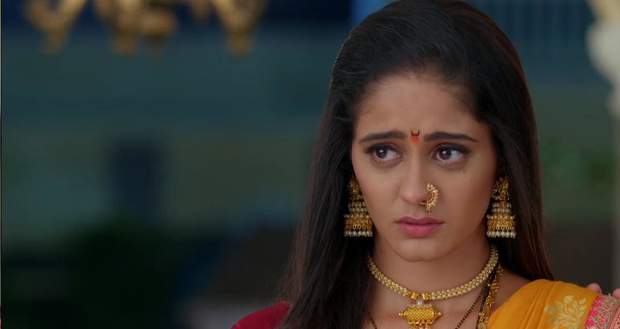 Virat takes a stand for Sai, while Bhavani insults Usha and Sai multiple times. Sai misses her father Kamal and mutters that she is being blamed for no reason.

Pakhi requests Bhavani and the other family members to let Sai enter the Chavan house. Bhavani questions her if she asked Virat about his marriage decision or not.

Karishma says that Mohit tried to inform the family about Virat’s marriage but Virat denied to tell anything.

Bhavani gives her decision that she doesn’t accept Sai as her daughter-in-law. Virat refuses to send Sai and Usha back to Garchiroli.

Pakhi tries to make Bhavani understand to accept Sai, while Ashwini says thanks to Pakhi for understanding the truth.

Shivani welcomes Sai to the Chavan house. Ashwini takes a stand for Virat’s decision and declares that she accepts Virat and Sai’s marriage.

Bhavani misunderstands Sai and says that she has married Virat for her personal benefits. Shivani asks Ashwini to prepare for Sai’s Grahpravesh.

Devi arrives there and gets happy to see Virat’s beautiful wife. Sai starts crying and Devi tells her that her mother Bhavani keeps on scolding her.

She also reveals a secret that Pakhi likes Virat and warns Sai to take care if Pakhi keeps Virat in her control.

Ashwini welcomes Sai and Virat in the house by performing the Grahpravesh ritual. Devi says that Pakhi entered the house in the wrong way so she lost her husband.