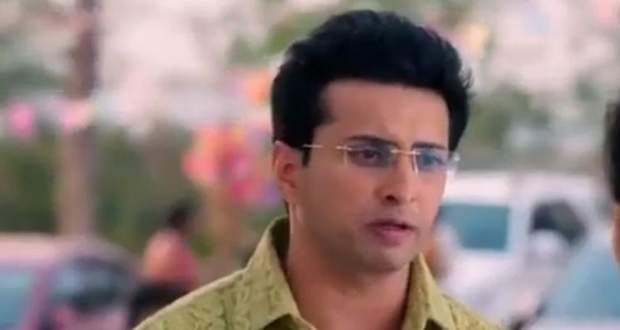 Today's Gum Hai Kisi Ke Pyaar Mein 3 April 2021 episode (GHKKPM) starts with Pakhi drinking Thandai and saying that she will throw colour on Virat and imagines dancing with him.

She comes out of her dream and gets upset seeing him dancing with Sai and gets shocked when he throws colour on Sai's hairline.

Virat puts her Dupatta over both of their head but Pakhi gets disheartened and leaves.

Sai and Virat are about to kiss while Sai sees Pulkit's call and steps back.

Pulkit tells Madhuri that he fears that Sai might have gotten caught by the Chavan's.

Virat apologises to Sai and goes while he thinks about what he did with Sai. He opens his eyes to see Pakhi who starts accusing him of breaking his promises.

Karishma comes there and tells him that Bhavani is asking for him.

Virat goes to the family while Sonali asks him about Sai.

Sai is in Devyani's room and tells her that she is here to take her to Pulkit.

Virat is looking for Sai while Sunny makes him drink Thandai due to which he imagines him as Samrat and gets emotional.

Virat and Sunny dance while Bhavani and Sonali wonder where Sai is.

Sai tells Devyani about the whole plan of how they will sneak out.

Devyani gets ready in bridal attire and goes to sneak out from the back door while Bhavani notices Sai and asks Sai what is she doing in the hall.

© Copyright tellybest.com, 2020, 2021. All Rights Reserved. Unauthorized use and/or duplication of any material from tellybest.com without written permission is strictly prohibited.
Cached Saved on: Monday 3rd of October 2022 08:58:58 PMCached Disp on: Friday 7th of October 2022 02:34:59 PM