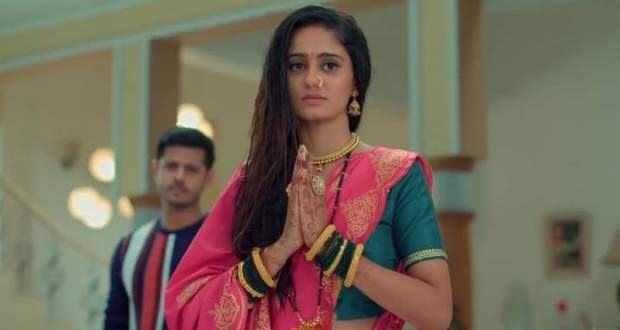 Today's Gum Hai Kisi Ke Pyaar Mein 3 December 2020 episode starts with Virat apologizing to Sai for his family's behaviour and telling her to not become an angry young woman.

Pakhi serves everyone breakfast saying that she made her father's favourite dish as it is his birthday.

Everyone wishes him a Happy Birthday, while Bhavani praises her and insults Karishma and Sai again.

Ashwini tells Bhavani to keep her opinions to herself while Bhavani says that she does not accept Sai-Virat's marriage so there would be no rituals.

Ashwini says she will fulfil her duty of being Virat's mother by making his married life happy. Meanwhile, Pakhi questions Sai, while Ashwini further tells Pakhi to respect the limit of her friendship with Virat.

Ninad scolds Ashwini for not thinking once before saying anything to anyone. On the other hand, Karishma questions Sai as to why was she sleeping on the sofa instead of the bed.

Ashwini tries to convince him by saying that rituals will be for everyone’s happiness. Virat agrees to do the rituals but Sai becomes confused.

Ashwini praises Sai for being straightforward while Usha says that she has an open mouth. Ashwini explains the rasam to Sai, while Sai says why can’t everyone be like her in the house.

She praises Sai and tells her that she is very beautiful and everything will be ok with time.

© Copyright tellybest.com, 2020, 2021. All Rights Reserved. Unauthorized use and/or duplication of any material from tellybest.com without written permission is strictly prohibited.
Cached Saved on: Saturday 23rd of January 2021 01:30:02 AMCached Disp on: Tuesday 26th of January 2021 02:41:00 PM