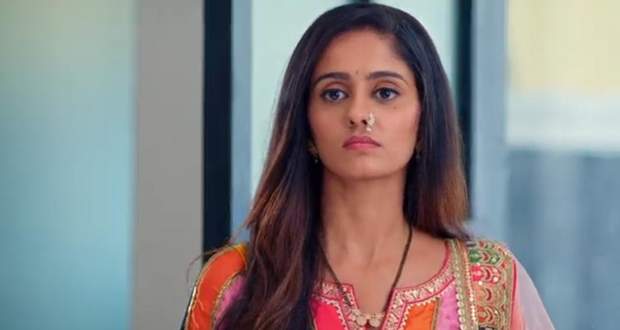 Today's Gum Hai Kisi Ke Pyaar Mein 3 February 2021 episode starts with Virat compliment Sai for feeding him while Viji wakes up and informs Sai that she was the one who cut her calls as she was playing on Virat's phone.

They meet Viji's father who talks to them and shows his gratitude to Virat for getting his operation done taking care of Viji and the couple leaves.

Meanwhile, the Chavan's get worried for Sai he reaches home with Sai. The family berates Sai and Virat thinking that they went late night while Virat will clear everyone's misunderstanding.

Later, the couple is in their room while Virat asks her how she knew that he was in the hospital when she replies with a question asking him why he went to her college the other day.

Virat first declines meeting Aniket but soon accepts the truth and apologise to Sai who then tells her to that she found out his location through the DIG.

She leaves while Virat holds her hand and makes her sit beside him and looks her in her eyes while they share a romantic moment.

Next morning, Sai and Ashwini are preparing breakfast while Ashwini thanks her for taking care of Virat the previous night.

Elsewhere, Bhavani informs everyone in the living room that there is a letter from Samrat's office in Ladakh and inform them that Pakhi has to go there to sign on some official documents.

Virat comes downstairs and offers to go with Pakhi if she needs to go.

© Copyright tellybest.com, 2020, 2021. All Rights Reserved. Unauthorized use and/or duplication of any material from tellybest.com without written permission is strictly prohibited.
Cached Saved on: Wednesday 28th of July 2021 01:54:38 AMCached Disp on: Wednesday 4th of August 2021 06:06:39 AM