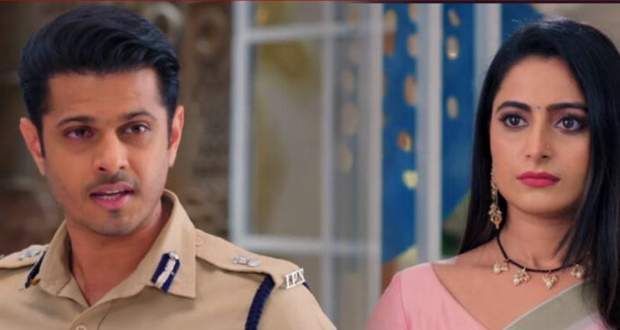 Today's Gum Hai Kisi Ke Pyaar Mein (गुम है किसी के प्यार में) 3 March 2021 episode starts with Devyani declining to go with Pulkit while he tells everyone that he will not take Devyani with him when she is scared to come with him.

He further reveals that Devyani had wished to have a grand wedding and that he will make her dream come true by coming there again and marrying her in front of everyone.

He shows his gratitude to Virat and Sai while Pakhi questions Virat if he will go against the elders' decision to which he replies that the elders Decision didn't do any good to Devyani and that Devyani should take her own life decisions for once.

Bhavani says that he may have some need from Devyani and will throw her out once the need is over to which Pulkit silences her by asking her if he should reveal to everyone what she did with him and Devyani.

He further thanks to the house members who supported him and leaves with the promise of taking Devyani with him.

Later, Sai is talking with Devyani and tells her that she will dance a lot in her marriage but starts crying remembering Kamal's wish to dance at her wedding.

Devyani asks Sai not to cry and fulfil her father’s dream in her marriage.

Meanwhile, Bhavani apologies to Pakhi for shouting at her earlier and asks her if she has any questions regarding the Pulkit situation.

However, Pakhi tells her that she trusts her decisions completely while Bhavani cooks up a fake story of Pulkit trying to use Devyani for greed and tells her that only she can save the Chavan family's prestige.

She also reveals that Devyani had gotten pregnant and the child couldn't be aborted so she got Devyani to deliver in a hospital and put the child in an orphanage.

Elsewhere, Ninad is scolding Sai while Virat questions him why no one knew about Devyani being married.

Sai says that she will not let anything bad happen to Devyani's future while Virat supports her.