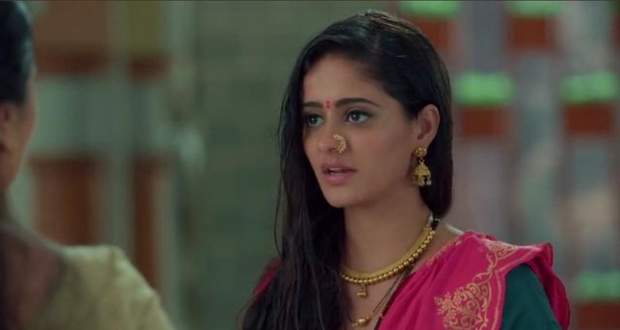 Bhavani taunts Ashwini as to why Sai is still not here. Virat asks Pakhi to help Sai get ready and bring her there.

Pakhi tells Sai that she brought Gajra for her. Sai says I will wear it myself. Usha tells Sai to wear Mangalsutra while Pakhi watches them.

Ashwini tells that they need to complete the rituals as Sai-Virat sits on the sofa.

Usha gives a silver coin to Virat for the ritual and Devyani takes it from him saying he already has Sai.

Sai questions Ashwini about Devyani but Ashwini tells her that she doesn't need to know about her.

Virat tells Sai that PMT exams are near and that he will get her admitted into the top medical college in Nagpur.

He tells her that Pakhi will help her in their studies but Sai refuses saying that she doesn't need a tutor.

Virat tried to convince her saying Pakhi is a mature girl.

Afterwards, Usha tells Sai to behave but she says that she will speak up if someone talks ill about her.

Ashwini clicks pictures of Virat and Sai while Virat questions if it is necessary. Karishma and Shivani make them pose romantically.

Sai tells Virat that he can remember her from these pictures when she is gone.

Virat tells her that she has to be mature to understand that there is a difference between taking responsibility and clicking pictures.

Sai taunts him asking if he wants her matured like Pakhi is.