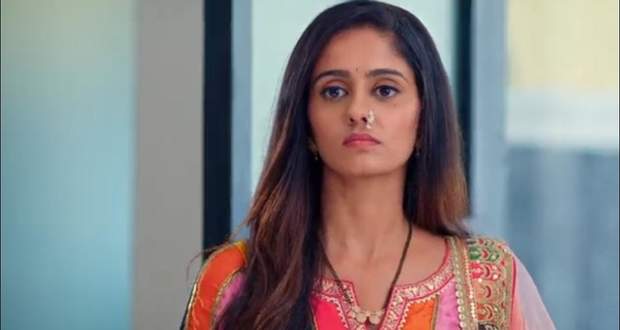 Today's Gum Hai Kisi Ke Pyaar Mein 4 March 2021 episode starts with Bhavani telling Pakhi that she lied to Pulkit that Devyani had given a stillbirth and that sent went away from Nagpur after marrying someone else.

Pakhi asks Bhavani what she what's from her while Bhavani reveals that she wants her to explain to Virat that Pulkit might have evil motives.

Bhavanu tells her that they have to stop the marriage at any cost as Pulkit will always be a servant to her while bad-mouthing Sai.

Suddenly, Sai comes there amd says that it is not good to talk about people behind their back and says that she is trying to return the happiness to Devyani which Bhavani snatched.

Ashwini calls everyone for prayer and Pakhi is about to sit near Virat while Ashwini stops her.

Ashwini says that it is Mahashivratri Pooja so Virat's wife should sit with him.

Bhavanu asks where she is while Sai comes downstairs with Devyani and says that now the whole family is here.

However, Ninad and Omkar oppose her for going against Bhavani when Sai asks him then why did she lie about Devyani's marriage.

Sai says that It is Devyani’s right to pray for her and her husband’s new life while Ashwini and Virat also support her.

Virat and Sai begin the prayer.

Virat is ironing his clothes while Sai gives him Prasad and gives him food.

He stops Sai and thanks to her for doing everything for Devyani that he could never do.

Sai asks why didn’t you think before me that Devyani was married?

Virat tells Sai when all of this happened I was in academy and when I returned they all told me that someone broke Devyani’s heart so her condition is like this.

He further reveals that Bhavani told him that her condition will worsen if he questioned Devyani so he didn't do it.

Sai remembers something and reveals to Virat that Devyani and Pulkit have a daughter.

© Copyright tellybest.com, 2020, 2021. All Rights Reserved. Unauthorized use and/or duplication of any material from tellybest.com without written permission is strictly prohibited.
Cached Saved on: Wednesday 28th of April 2021 11:24:12 PMCached Disp on: Thursday 6th of May 2021 06:24:57 AM