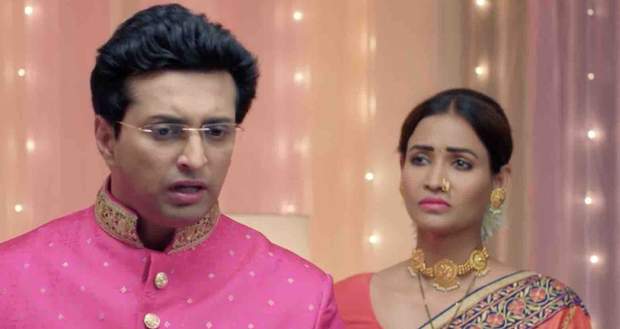 Bhavani asks her what she is doing there alone while Sai gets confused and looks around for Devyani but fails to find her.

Bhavani mocks her and orders her to stay inside the house till the celebration is not over and Sai agrees.

Sonali comes there and tells Bhavani that Barkha is waiting for her as she is going.

They leave while Sai manages to search for Devyani and goes towards the backdoor.

Elsewhere, Bhavani gives Barkha a silver coin and some Shagun and tells her to come back while Sai and Devyani try to open the back door but fail.

Sai takes Devyani through the front door while Devyani gets scared seeing the Chavan's.

Sai gives Bhavani a clay pot and wears one herself after which they crawl behind the tables towards the exit.

Virat notices them and tells about it to Sunny but he says that he is just hallucinating due to eating too much Bhaang.

They manage to get past the Chavan's and go towards the roadside while Sai calls the cab driver and asks him to come faster.

Meanwhile, Virat goes to leave Barkha to her car while she compliments Virat and Sai's dance and tells him to take care of her.

Devyani sits on the road saying that her legs are hurting while Virat sees them through the side mirror of the car but thinks that he is hallucinating.

Pakhi's parents come to the Chavan house while Sunny gives Virat water to reduce the effect of Bhaang.

Virat remembers his moment with Sai and goes to her room thinking that she is upset with him.

However, he doesn't see her and goes to take a shower.

Meanwhile, Madhuri tries to calm Pulkit who is getting worried with time.

© Copyright tellybest.com, 2020, 2021. All Rights Reserved. Unauthorized use and/or duplication of any material from tellybest.com without written permission is strictly prohibited.
Cached Saved on: Thursday 28th of July 2022 10:44:34 PMCached Disp on: Wednesday 17th of August 2022 04:31:05 PM