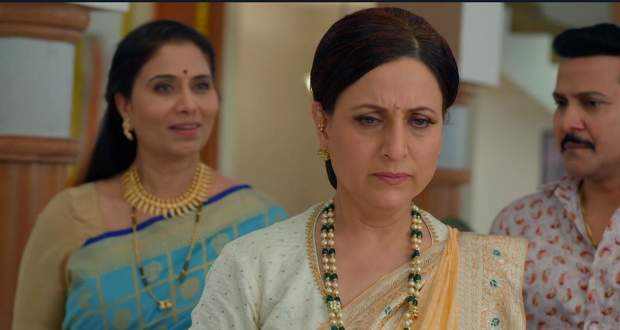 Karishma questions Sonali that are they counting Pakhi as a married woman, while everyone rebukes Karishma for saying it.

Ashwini states that Pakhi will do the rituals. Further, the ritual ends and Sai touches Virat's feet after being told by Ashwini.

Virat asks Bhavani, Mansi, Ninad and Omkar to eat food prepared by Sai as the last ritual but they decline.

Ashwini pleads them to complete the last ritual which speaks a fight between her and Bhavani.

Bhavani threatens to leave the house but Ninad stops her.

Ninad calls Sai-Virat's marriage an accident and Sai confronts him saying if she can accept this marriage, then why can't they.

Sai says that she is doing this ritual for Chavan family and gives them an ultimatum saying if they don't eat, then she will leave the house.

Bhavani and others sit and Sai serves them the food cooked by her while Virat starts admiring her.

Sunny thinks that Sai's magic is working on Virat. Later, Ashwini says that there is one last function for Virat and Sai in the evening.

© Copyright tellybest.com, 2020, 2021. All Rights Reserved. Unauthorized use and/or duplication of any material from tellybest.com without written permission is strictly prohibited.
Cached Saved on: Thursday 28th of January 2021 03:36:29 PM