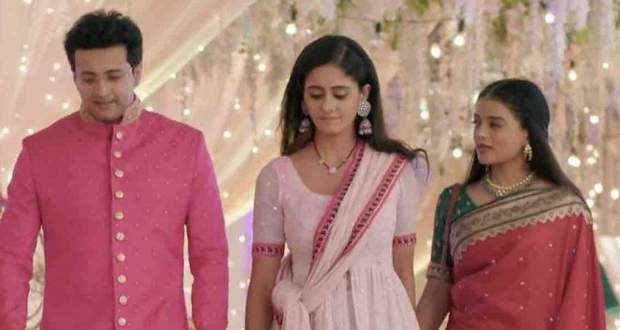 Meanwhile, Sai and Devyani reach the wedding venue where Pulkit and Madhuri wait for her and show their gratitude to her for helping them.

Virat calls Sai while Sai gets tensed and does not answer the phone.

The Chavan's find out that Devyani is also missing and think that Sai has taken Devyani outside.

Pakhi's parents reveal that they saw Sai and Devyani going somewhere in a taxi when they were coming there.

Sai tells Devyani to get ready in the wedding attire while Bhavani and Ninad start rebuking Virat.

They all start talking about where Sai might be while Pakhi suggests that she might have gone to Pulkit.

Pakhi and Virat argue over her statement while Bhavani thinks that her secret might be out and starts acting.

Virat says that Sai will get punished if she is getting Devyani and Pulkit married.

Suddenly, Mohit intervenes and says what if Pulkit isn't married and that Sangeeta Deshpandey was just a scam while Omkar stops him from speaking.

Virat gets angry upon not being able to contact Sai after which he calls an officer and tells him to send a team to Pulkit's home.