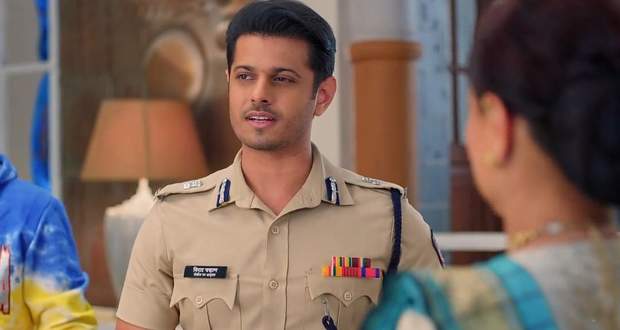 Today's Gum Hai Kisi Ke Pyaar Mein 6 February 2021 episode starts with Sonali suggesting to cook dish dishes while Bjavani tells to cook anything they want as she knows they are doing it for valentines day.

Sai pits the flowers Virat gave her in a flower vase and admire the picture of him giving her the bouquet.

Meanwhile, Asheini comes there and teased her what she is looking at and who gave her the flowers.

Sai says that Virat gave her flowers and shows her the pictures which makes Ashwini happy and she requests Sai to send the photo to her phone.

Later, Ashwini's hand gets burnt while cooking and Pakhi tends to her. She sees Sai, Virat's picture and gets jealous while Ashwini tells her to not keep her eye on Sai, Virat and focus on her work.

Virat comes home with chocolates and roses and gives to everyone in turns.

Pakhi goes away while Virat follows her and gifts her a rose but she accuses him of doing it to cover up him gifting his wife flowers and tells him that he forgot his promise.

Pakhi angrily tells him to give the flowers to his wife only but Virat gives her a rose and chocolates after which is leaves.

Virat presents a rose to Sai and tells I gave flowers to every family member once. Sai is happy that she got roses twice.

Meanwhile, Bhavani, Sonali, Karishma and Ashwini come there and console her.

At the same time, Devyani is drawing in her book while Virat comes there and gives her chocolates while Sai gives her the chocolates there were hers.

Sai tries to put the flower in Devyani's hair but Devyami hears it and tells her to stop.

Sai tries to get the name of her husband but failed when she notices D and P on each side of heart amd wonders who the P letter would be for.