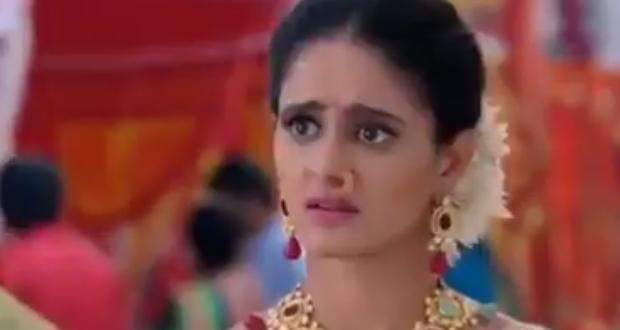 Today's Gum Hai Kisi Ke Pyaar Mein 6 March 2021 episode starts with Devyani calling Sai and telling her to bring pink Saree and bangles for her while Sai assures her that she will bring whatever she wants and disconnects the call.

Pulkit thanks Sai for reuniting him with Devyani while Sai asks him if he will accept Devyani in her mental condition.

Pulkit says that he will accept Devyani however she is and gives Sai the gifts he brought for Devyani.

Sai gets happy seeing the pink Saree and bangles while Pulkit gives her a snow globe and says that it is Devyani's favourite.

She praises him for remembering Devyani's favourite things even after all these years while Pulkit says that he feels that there is love between her and Virat.

Sai comes home with bags in her hands and tells Devyani that she brought gifts for her.

Ninad starts yelling at her saying that she is wasting his son's money while Sai reveals that Pulkit has sent the gifts for Devyani.

Devyani jumps in happiness while Sai shows her the pink Saree and the snow globe.

Bhavani signs Ninad and Omkar and they all start destroying the gifts.

Devyani picks up the broken globe and hurts her fingers.

Sai stops her and bandages her hand while Devyani cries.

Bhavani yells that she will not accept her servant's son as her son-in-law while Pakhi berates Sai saying how she could bring outsiders gifts without the family's permission.

Sai says that the person she is talking about is this house's son-in-law so she should respect him.

Sai says that she will count to five and if Bhavani does not pick up the gifts them she will expose them to the neighbours and everyone what she did to Devyani.