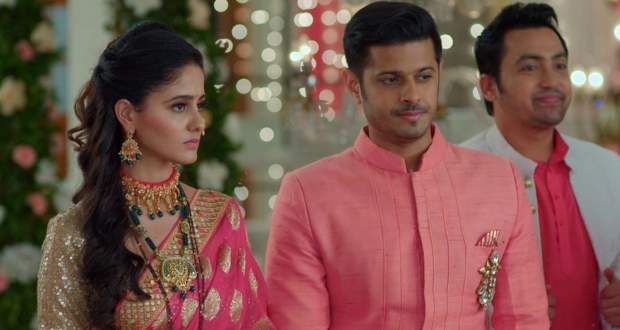 Today's Ghum Hai Kisi Ke Pyaar Mein 7 December 2020 episode starts with Pakhi entering Virat's room telling him to seek permission from Ashwini if he wants to keep talking to her.

Virat asks her if she would help Sai to get ready for the reception while Sai enters the room and voices her disagreement.

Sai and Virat get into a fight but he manages to convince her to let Pakhi dress her up.

Sai tells Pakhi that only she knows about the actual reason behind this marriage and that she will leave after she completes her studies.

Pakhi gets her ready while telling her that she and Virat will soon come to love each other.

Sai interrupts her and tells her that their marriage will always be a deal and reveal that she knows about their relationship.

Meanwhile, Ashwini is preparing for the function downstairs and requests Mohit and Karishma to attend to the guests at the gate.

Karishma taunts Mohit saying that the family is partial between him and Virat.

Sai comes downstairs and Ashwini takes her away while complimenting her.

Pakhi's father tells her to move on from Virat as he has already moved on by getting married.

Virat comes with Mansi and Ashwini tells Sai that he always cares about other first.

Sai and Virat converse while Pakhi watches them from her seat.

© Copyright tellybest.com, 2020, 2021. All Rights Reserved. Unauthorized use and/or duplication of any material from tellybest.com without written permission is strictly prohibited.
Cached Saved on: Tuesday 8th of June 2021 05:28:47 AMCached Disp on: Wednesday 16th of June 2021 06:09:27 AM