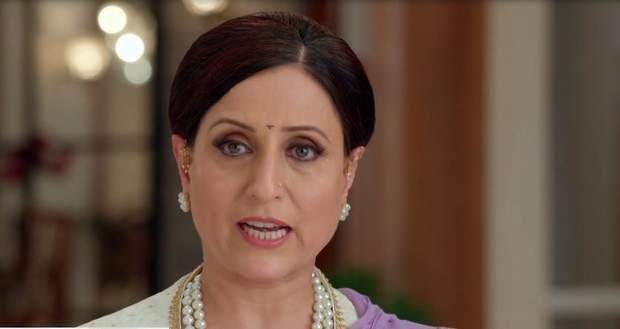 Today's Gum Hai Kisi Ke Pyaar Mein 7 March 2021 episode starts with Sai threatening to expose Ninad and Bhavani's cruelty to the neighbour's if they do not pick up the throw gifts.

The housemates start talking about Virat supporting her while Sai asks Pakhi why she is getting jealous which angers her.

Sai begins counting while Omkar and Ninad refuse to puck up the gifts.

Sai goes towards the entrance and completes her counting but no one picks up the gifts.

She starts shouting to the neighbours while Ninad stops her starts picking up the gifts while Bhavani and Omkar follow.

Pakhi tries to stop Bhavani but she tells her that she will do it and keeps picking up the gifts.

Bhavanu says that if Devyani's marriage proceeds, she won't stay in that house while Ninad supports her words.

Somali says yat the marriage won't happen while Sai says that she will get Devyani married anyhow.

Sai leaves to Devyani's room with Shivani and Ashwini to check out the gifts.

Devyani gets happy seeing the pink saree and says that Pulkit remembers everything and has sent so many gifts for her.

Meanwhile, Bhavani is crying while Pakhi comes there and tries to console her.

Ashwini gets emotional and tells Devyani that the house will be silent after she gets married and leaves.

Sai clicks pictures of Devyani in punk Saree and sends them to Pulkit after which she questions why Pulkit amd Devyani always come to the topic of her and Virat.

Shivani, Ashwini and Devyani tell her that they all see how much Virat loves her and cares for her but she is the only one who doesn't see it.

Elsewhere, Bhavani says that she felt humiliated picking up the gifts and wanted to kick Sai out of the house at that time and is scared that she will get Devyani married.

However, Pakhi says she won't let it happen and will provoke Virat against this marriage anyhow.