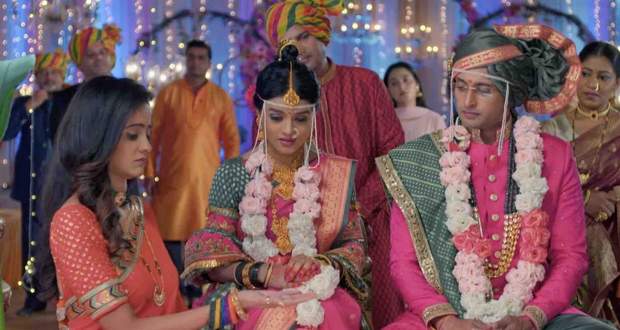 The neighbour reveals that they were dressed like they were going to marriage and left.

He questions them about Sangeeta Deshpandey and thinks that the letter was true based on their answers.

Meanwhile, Sonali shows everyone the half-burnt letter and accuses Sai of stealing it from Pakhi's cupboard and burning it.

Pulkit's Baarat comes while Devyani dances in her room and Sai gets happy seeing her happy.

Devyani requests Sai to become Pulkit's Saas (mother-in-law) and welcome his Baarat and she happily agrees.

Elsewhere, Virat gives Sai's phone number to a tracker and tells him to track down the number's location.

The tracker manages to find Sai's location and tells Virat that she is in Pawni lawns.

Virat is on his way to Pawni lawns while Pulkit and Devyani do the Varmaala ritual.

Sai does Devyani's Kanyadaan while Bhavani orders Pakhi to call Virat and get information on Sai.

Mangalsutra ritual is about to happen while Devyani stops and gets Sai to get her purse.

Sai gives her the purse while Devyani pulls out the chain Sai had given her and tells him to add this into the Mangalsutra and tie it around her neck.

Virat reaches the Pawni lawns while Pakhi calls Virat and questions him but he tells her that he will call her after stopping Devyani and Pulkit's marriage at Pawni lawns.

Bhavani tells Omkar and Ninad to come with her to Pawni lawns while Pakhi request to let her come but they decline.