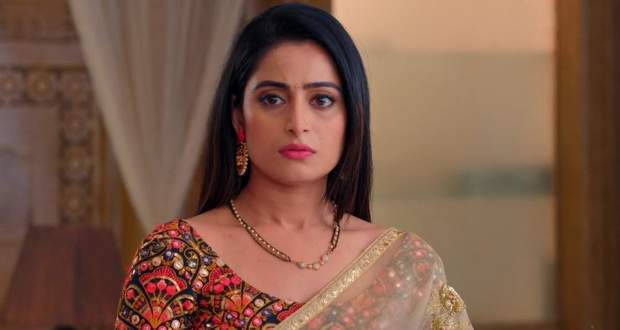 Today's Gum Hai Kisi Ke Pyaar Mein 8 March 2021 episode starts with Sai drying her hair with a towel while Virat looks at her.

She asks him why he was staring at her while he denies the accusation which makes both of them laugh.

He asks her what preparations are happening for Devyani's marriage while asking her if she considers his family hers.

She says that Devyani and Ashwini are her families while he asks her if she is her family.

She asks him for money to buy gifts for Devyani while he teases her and denies to give her money.

She says that she will go to her hometown and will get her father's money but Virat stops her and tells her that he will give the money to her in the morning.

She asks him why he always prevents her from going to her hometown while he thinks to himself that he is attached to her and can't let her go out of his life.

She tells him about that day's incident after which Pakhi comes to their room and tells Virat that she needs to talk to him about something in private.

He tells her to say it in front of Pakhi as she is also a part of the family while Sai tells him that maybe Pakhi has something personal to tell and goes out of the room.

Pakhi tells Virat that they should follow the elders' decisions as they know more than them while defaming Sai by calling her immature.

Virat tells her that Sai is not immature as she knew about Pulkit and Devyani before everyone and invited Pulkit to their house only after going through Pulkit's details.

Meanwhile, Usha and Sai are talking about Devyani's marriage and plan to get some gold jewellery for her as a gift.

Pakhi tries to instigate Virat against Devyani and Pulkit's marriage but gets frustrated realising that Virat is adamant to get Devyani married and believes Sai.

© Copyright tellybest.com, 2020, 2021. All Rights Reserved. Unauthorized use and/or duplication of any material from tellybest.com without written permission is strictly prohibited.
Cached Saved on: Tuesday 18th of May 2021 03:46:00 PM