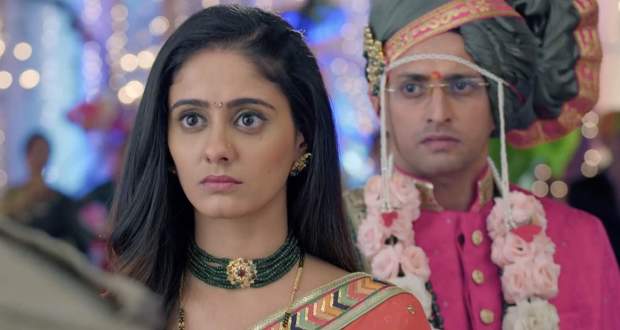 The last Phera is about to happen when Virat reaches there and announces that this marriage can not happen as it is illegal.

Virat and Sai are arguing while Devyani stops him while telling him not to berate Sai but Virat reveals to her that Pulkit is already married to someone else.

Pulkit agrees to say that he has been married before and says that he is married to Devyani Chavan.

Bhavani, Omkar and Ninad arrive there and berate her while Devyani stops them saying that they are not her family and only Sai is.

She tells Virat that he doesn't even know what happened there and says that she will never go to that house.

Sai tells Bhavani, Omkar and Ninad to correct their mistake by blessing Pulkit and Devyani's wedding.

Virat argues with Sai and says that he is arresting Pulkit for doing second marriage and manipulating a mentally ill person.

However, Pulkit responds by saying that he cannot arrest him for a crime he never committed and that he can prove that Devyani is not mentally ill.

He reveals that Devyani is fine and that the medicine given to her is incorrect.

He asks Virat if he has any proof to which Virat shows him a document in which it is written that Sangeeta is Pulkit's wife.

Bhavani insults Pulkit and Madhuri's relationship which angers them and he responds while Virat tells his family to let him handle the situation.

Upcoming Gum Hai KisiKe Pyaar Mein (GHKPM) (tomorrow) episode update: Sai and other guests to form a chain around the Mandap to get Pulkit and Devyani married.