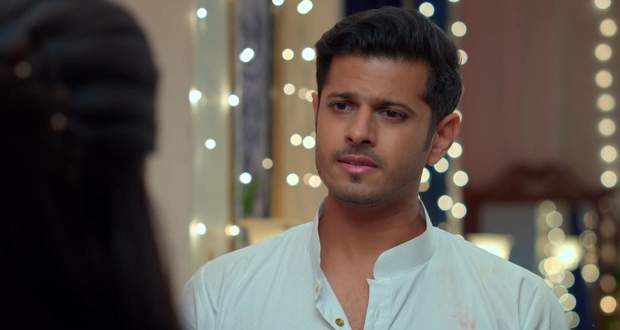 Karishma and Shivani tease Sai while taking her to the room.

Pakhi feels sad when she sees Sai-Virat's room decorated for their first night.

Everyone leaves while Virat stops Pakhi and tells her that he wants to talk to her.

However, Sai tells Virat that talking to Pakhi at late night is against their deal and tells Pakhi to go.

Elsewhere, Ninad and Ashwini get into a fight and she tells him that she won't let Sai-Virat's marriage go wrong as they did.

Ashwini confronts him and says that she never felt accepted in this family in the past 28 years.

Sai looks for a place to sleep but Virat tells her to sleep on the bed as he knows his limits and won't cross them.

Sonali tells Omkar that Sai might influence Karishma but she won't let that happen and wonders how Sai handles Bhavani.

Virat teases Sai saying that she is very weird but tells her that he admires how she handles Bhavani.

He tries to convince Sai to take Pakhi's help which makes her feel angry.

He questions her about why she told Pakhi which makes her furious.

She tells him to go to Pakhi if he wants to talks to her right away.

Sai jumps into Virat's arms seeing a lizard and he makes fun of her for it.

Pakhi comes there to ask Virat for medicine and sees a lipstick mark on Virat's shirt.

She misunderstands the situation and starts rebuking Virat.

Sai tries to intervene and Pakhi starts fighting with her which puts Virat in an awkward situation.