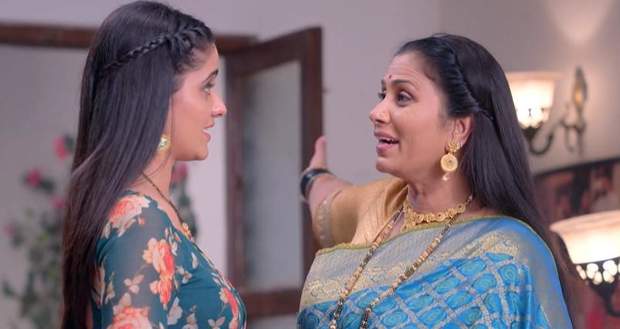 Just then Patralekha comes in and asks to become Vinayak’s mother.

Patralekha tells Bhavani that she has been taking care of Vinayak for a long time and have become attached to Vinayak and now that he is taken away from her and given to Sai she feels empty and that is why she has attempted suicide.

Sai intervenes in between and tells Patralekha that she knows from the beginning that she will have to give the child her after delivery and had Geetha been there then she wouldn’t have asked to keep the child.

Bhavani tells Sai that Patralekha is not Geetha and the child belongs to the family and everyone will take responsibility for him and tells everyone that Patralekha will raise Vinayak as her son.

Sai objects to Bhavani’s decision and asks Virat to say something.

Virat feels indebted to Patralekha and tells everyone that to keep Patraleka alive he can let Patralekha keep Vinayak.

Sai loses her temper and tells him that she will not give back the child to Partralekha.

Virat tells her that in a joint family all the people take care of each other and they all will get a chance to play with the child and when Patralekhha will get better then they will take back the child from her.

Sai tells Virat that Vinayak is not a toy that can be used like a plaything.

Ashwini also supports Sai’s decision however, Virat tells Sai that he cannot be that selfish as to let Patralekha die because he cannot give his child to her.

Just then Vinayak wakes up and Sonali goes to get the baby.

Sai takes the baby from Sonali and hugs him tight saying she will not give her baby to Patralekha.

Patralekha accuses Sai of Samrat's death and requests Sai to not take the child from her too.

Sai tells her that Vinayak is not her child and nor will she give it to her.

Sai is outraged to see her child in Patralekha’s arms and warns her that she has crossed the limit and challenged a mother who turns into a lioness to save her child.

She announces to everyone that now Patralekha will reap what is coming to her.

© Copyright tellybest.com, 2020, 2021. All Rights Reserved. Unauthorized use and/or duplication of any material from tellybest.com without written permission is strictly prohibited.
Cached Saved on: Sunday 2nd of October 2022 11:59:39 AMCached Disp on: Thursday 6th of October 2022 04:48:01 PM