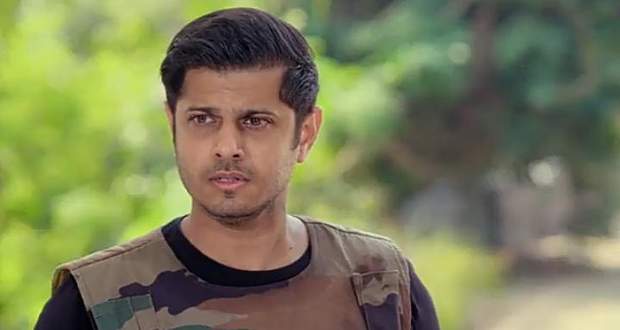 Meanwhile, Shruti comes in front of Virat and aims a gun at him saying that he killed her husband while other terrorists come out and point their guns at him.

Suddenly, an officer comes there and informs them that Sadanand's body is missing.

Virat informs Shruti that he and Sadanand we're college friends and that Sadanand told him something before dying that he can only tell her.

Virat removes his gun and puts it on the ground after which Shruti tells other terrorists to go away.

Ashwini comes to Sai's room and tries to put her to sleep but Sai again gets a nightmare and leaves the room.

Virat informs Shruti how Sadanand told him to take care of her and help her bring Sahas into life while she refuses to believe her.

Shruti breaks down and tells Virat that she just wants to keep Sadanand's last memory safe while putting a hand on her baby bump.

Virat tells Shruti that she is the next target of the police and tells her that he will come at night to take her to a safe place and leaves.

Sai is crying in the temple while Bhavani comes there and scolds her for crying but Sai stands her ground.

Ashwini sees the interaction and thinks that Sai has accepted Virat as her husband.

© Copyright tellybest.com, 2020, 2021. All Rights Reserved. Unauthorized use and/or duplication of any material from tellybest.com without written permission is strictly prohibited.
Cached Saved on: Wednesday 19th of January 2022 12:57:37 PM