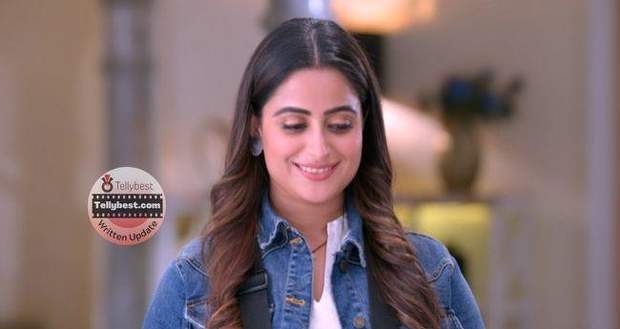 Today's Ghum Hai Kisi Ke Pyar Mein 10th December 2022 episode starts with Savi coming to Virat telling him that she is ready and asking Virat to take Sai as well as it is her birthday.

Virat looks angry at Sai and tells Savi that Sai has to study and will not be joining them.

Savi insists but Sai does not budge.

Outside the house, Jagthap is still waiting and smiles at Savi.

Virat taunts Jathap for being at Sai's house while Jagthap shames him for being the same over the years.

He also tells him that Virat does not deserve to have wives like Sai or Patralekha because they are so good and deserve so much better than him.

On the other hand, Usha tells Sai that she has made the right decision to send Savi with Virat.

However, Sai is upset to at not being with Savi on her birthday as Virat has taken away that happiness from them.

Sai looks at the fried Modak she has prepared for Savi and cries seeing that Savi has not eaten any of it.

Later, Patralekha asks Savi about Sai who tells her that she has some work and will not be joining them.

Vinayak complains to Savi for not telling him about her birthday while Savi tells him that she did not remember it herself and Sai did not remind her of that.

Later, Virat tells Savi now that they know about her birthday so they will make it happen.

At school, Patralekha presents Savi with a birthday sash and fairy wings to make her feel special.

Virat takes their selfie and sends it to the family group informing them about Savi’s birthday.

Ninad tells everyone about it and makes a video call to Virat to wish for Savi and tells them that they will make arrangements for her birthday party in the evening.

Later, Sonali comments about Sai being absent in the video call while Bhavani tells her that Sai will find an excuse to arrive there somehow.

Meanwhile, Savi is distributing sweets to her friends on the bus while Virat feels sad that they were not able to bring the cake for Savi that they could have cut.

However, Patralekha tells Virat that they have used their old cake shop to order Savi’s cake and they will deliver to the picnic spot.

Later Savi becomes sad thinking of Sai and tells Virat that Sai has never abandoned her before on a birthday and she misses her a lot.

However, Virat tells Savi that when her Baba is there no one will be sad.

Meanwhile, Ninad and Ashwini are preparing for Savi’s birthday and are sceptical about arranging a birthday party where Sai will also come and that might create more fiction in Patralekha and Virat’s relationship that has improved just a little.

However, Ashwini is sure that Patralekha has a big heart and will not object to them celebrating Savi’s birthday.

After a while, the kids are celebrating with their parents and the bus moves at speed.

After some time the bus stops and the driver tells Virat that someone is standing with balloons.

Later, Savi recognises Sai and rushes down to meet her telling her that she was missing her so much while Sai tells her that she has come to celebrate her birthday with her and brought fried Modak that she has not eaten.

Virat and Patralekha also come down looking at Sai with derision.