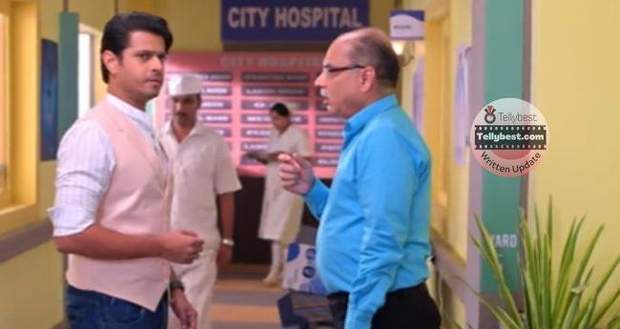 Today's Ghum Hai Kisi Ke Pyar Mein 10th January 2023 episode starts with Sai asking Dean what he was telling her about a man asking for the bus accident.

The dean changes his testimony and tells Sai that he was enquiring about Nagpur to Mumbai.

Sai feels disappointed and asks to see the records of the patient's list of that accident but the dean lies about it too and tells her that there are no records available older than five years.

Meanwhile, Sai decides to call Anandi to ask her to tell her about the Garchiroli accident.

In the meantime, Virat apologises to Sai for blocking her investigation.

Later, Sai returns home dejected after getting a negative answer from Anandi as well.

Sai sits at the front of the house crying at meeting a dead end while Virat watches her from afar and tells her that he understands her pain and disappointment but circumstances have become such that he cannot let her get to the truth.

After a while, Sai tries to light a lamp in front of Kamal’s photo but gets frustrated when the match does not spark.

Just then Kamal’s illusion appears in front of Sai asking her about Vinayak.

Sai shares her disappointment at not being able to get results from anywhere.

Kamal tells Sai about the incident of the past when everyone has lost hope of him being alive except her.

He tells her that she had forced his whole department to once again look for him and finally managed to find him alive.

Kamal tells her that she should not give up just because people are putting hurdles in her way.

He also reminds her that she is a daughter and wife of a police officer and needs to think and act like one.

Sai corrects him about being Virat’s wife while he tells her that soon she will find out about that too.

Feeling encouraged, Sai promises Kamal that she will not give up and find out about her son.

Later, Sai arrives at the Bal orphanage to sneak into the orphanage’s office and steal the data from the office computer.

Sai climbs the wall from the back of the office and enters stealthily to the office to find it locked.

She recalls a bathroom attached to the office and goes to look for a window to get inside.

Fortunately, there was one.

In the meantime, Bhavani is asking Sonali about the Voter list that she has asked to prepare and becomes furious when Sonali tells her that she hasn’t done it.

Just then a parcel from Rajeev's addresses Sivani as ‘Mumma’ arrives.

Virat smiles meaningfully and tells Ashwini that Shivani is pregnant.

Everyone begins to smile at the good news except Bhavani and Patralekha.

Elsewhere, Sai manages to get inside the bathroom in the nick of time.