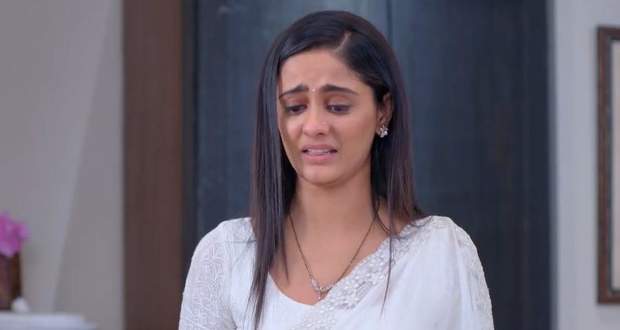 Today's Ghum Hai Kisi Ke Pyar Mein 10th June 2022 episode starts with Bhavani blaming Sai for Samrat’s death saying that when a woman of the house goes out to work then calamities befall the house.

Patralekha once again tells Sai that she has killed Samrat and has taken away her happiness from her.

She tells her that she will do her best to throw her out of the house.

Ninad also favours Sai and tells everyone that Sai loved Samrat a lot and has brought him back in the past.

However, Bhavani remains adamant and tells them that Sai should have left when she had given her the choice.

Patralekha tells Bhavani that she can rectify the mistake and drags Sai out of the house when Bhavani stops her and tells Patralekha that Sai is carrying the heir of the family therefore, she cannot let Sai go.

Patralekha shows remorse for losing the chance of getting pregnant because Sai has taken Samrat’s life.

She also says that nobody cares for her in this family and never has cared for Samrat.

Bhavani tries to deny the allegation but Patralekha tells Bhavani that she has turned her attention towards Sai when she thought that Sai has become an obedient daughter in law but returned to her again when Sai disappointed her.

Mansi tries to tell Patralekha that Samrat has always been loved in the house and she has witnessed it.

However, Patralekha continues to blame Sai for taking Virat and now Samrat away from her.

Sai tries to be understanding to Patralekha and tells her that in anger people tend to take things in the wrong way.

Patralekha retaliates in anger saying that Sai has taken away her husband and hope to have a child.

With the realisation, Patralekha begins to mourn the ultimate loss and how she will always be alone now.

Just then a person from the touring company comes with gifts and information about the booking.

As they unpacked the gifts and see the personalised item for each member their tears begins to flow again.

Mansi recalls Samrat’s readiness for these occasions and how she will never hear his voice again.

Just then Karishma plays Samrat's voice note on a phone which came with the gifts.

© Copyright tellybest.com, 2020, 2021. All Rights Reserved. Unauthorized use and/or duplication of any material from tellybest.com without written permission is strictly prohibited.
Cached Saved on: Monday 3rd of October 2022 04:17:02 AMCached Disp on: Friday 7th of October 2022 09:40:11 PM