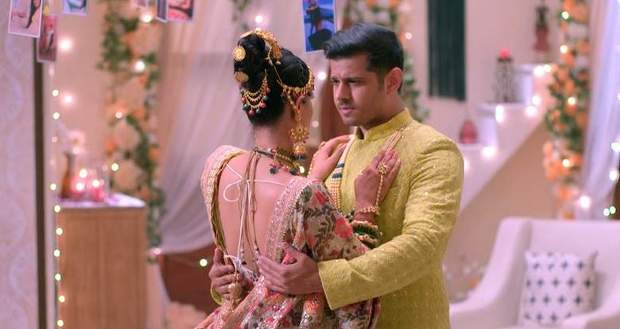 Today's Ghum Hai Kisi Ke Pyar Mein 10th May 2022 episode starts with Sai and Virat hugging each other out of happiness and sit on the bed.

They sit on the bed and talk while Sai asks Virat why he told Bhavani about her choosing to become a housewife over a doctor.

Virat tells Sai that he lied to Bhavani and apologizes to her saying that had to lie in that situation.

Virat tells Sai to trust him and further kisses her hand saying that he would have proposed to her by getting on his knees.

However, Sai tells Virat that they went through a lot of hurdles to get the approval of the family for Rajiv's marriage and lied when it came to them.

Virat tells Sai that he will fix everything and tells her that he loves her with a huge smile on his face.

Elsewhere, Ashwini asks Bhavani why she asked that question to Sai in the middle of the marriage saying that it was not appropriate.

However, Bhavani justifies that her actions were correct saying that Virat gave a reply to her answer instead of talking back.

Meanwhile, Sai insists to Virat that she can't lie to Bhavani and leaves the room to tell her the truth.

Bhavani tells Ashwini that she should be glad that she stopped the family from breaking as Sai's career would have tied Virat to her pallu.

Sai is about to knock on Bhavani's room but Virat stops her and takes her back to their room saying that he lied to Bhavani to save her career.

Bhavani sees a shadow in the window of the door and sneaks up to open it.

Karishma suddenly gets startled at the opening of the door and stutters while Bhavani questions her why she was lingering by the door.

Confused, Karishma says that she just came there which confuses Bhavani and Ashwini.

Back in Virat's room, he manages to convince Sai to keep his lie a secret till her results come out.

She agrees while telling him to do it soon as she can't lie for too long.