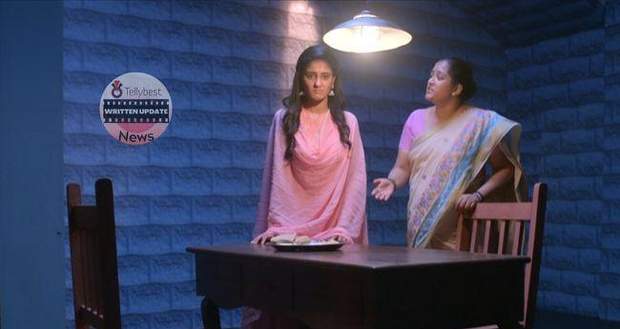 Today's Ghum Hai Kisi Ke Pyar Mein 10th November 2022 episode starts with Savi asking Virat about Sai while Virat tells her that Sai is busy and that is why Savi has come here to stay with him.

Seeing Savi sad, Virat tells her that he and Vinayak will make a special corner for her and they will have a gala time there.

Virat and Vinayak also tell Patralekha to prepare some soup, pasta and garlic bread for them.

Meanwhile, Sai is shouting in the room to let her out.

Just then Usha comes to her room and tells her that Virat has locked her because he is angry with her.

Sai gets angry telling Usha that Virat does not deserve to be Savi's father who never stood by her and even married the woman responsible for her leaving the house.

Sai also reminds her how she has been a mother and father to Savi and has seen her grow up, and take her first step and now Virat wants to exercise rights over her.

Resolving to keep Virat away, Sai tells Usha that she will not allow Virat to come close to Savi let alone take her from her.

In the meantime, Patralekha is preparing food in the kitchen but her mind is engrossed in the shocking happenings of the morning and finds it difficult to accept that Savi is Virat’s daughter.

In her absentmindedness, Patralekha puts her dupatta on fire.

Just then Ashwini comes to the Kitchen and rescues Patralekha’s dupatta while Patralekha hugs her in turmoil.

Patralekha complains to Ashwini for having such poor luck that things never go in her favour.

She finds it difficult to accept that Savi is Virat’s daughter and worries how this new revelation will affect her life.

In the meantime, Sai refuses to eat anything until she gets her daughter back.

Meanwhile, Virat and Savi are getting the tent ready when Vinayak brings a board for it and tells Virat that it has both their initials.

Later, both the children shower on Virat kisses when Patralekha comes there with food.

Meanwhile, Vinayak asks Patralekha to put the food on the table and asks her about her dupatta.

However, Virat remains busy with Savi and pays no heed to it which hurts Patralekha.

Elsewhere, Sai is shouting to get out and tells the police that they will have to pay for keeping her here without any reason and asks them to return her phone so she can talk to her lawyer.

Later, the doctor checks up on Savi and tells Virat that Savi has a sunstroke and will get well soon.

On being asked, Virat tells the doctor that Savi is his friend's daughter and is like a daughter to him too.

After a while, he sees his phone ringing and picks it up.

The officer tells him that Sai is creating a lot of drama at the station and is asking for her phone to call her lawyer.

Virat tells her that he will come and file a formal complaint against her and tell the officer to let Sai have all the rights as a prisoner.

Meanwhile, Patralekha tries to stop Virat from taking legal action against Sai but Virat is too angry to see the reason.

He tells Patralekha that Sai deserve punishment more severe than this for keeping Savi’s truth from him.

© Copyright tellybest.com, 2022, 2023. All Rights Reserved. Unauthorized use and/or duplication of any material from tellybest.com without written permission is strictly prohibited.
Cached Saved on: Monday 21st of November 2022 04:45:24 AMCached Disp on: Thursday 1st of December 2022 01:13:50 PM