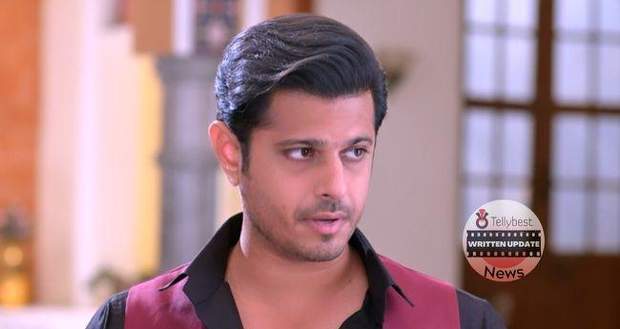 Today's Ghum Hai Kisi Ke Pyar Mein 10th October 2022 episode starts with Vinayak asking angrily about the problem in sending Savi and tells Sai that if Savi will not come then he will not attend his parent’s party.

Meanwhile, Virat is cajoling Savi out of a bad mood and orders ice cream for her.

Seeing Savi and Virat together, Usha asks Sai to not let the children suffer because of their animosity.

Sai is scared of Chavan's behaviour with Savi while Usha tells her to not overthink as Virat will not let anyone badly treat Savi.

Sai realises her mistake and fix Savi’s drawing into a frame to be taken to the party.

Savi becomes extremely happy and hugs Virat and Sai at the same time.

Meanwhile, Chavan's are welcoming their guests to the party when Ninad asks Patralekha why is she not ready yet.

Patralekha anxiously tells him that Vinayak has locked himself in his room saying that he will not come out until Savi comes to the party.

Ninad tells Patralekha to not worry and get ready and they will find a way to take Vinayak out of his room.

Elsewhere, Virat is wondering about Sai’s change of heart.

Meanwhile, Sai expresses her concern to Usha for Savi being treated badly at the Chavan house.

After a while, Savi comes out of her room dressed in the black dress that she was saving to meet her father.

Virat is astonished to see her in that dress and asks her why has she chosen to wear this dress.

Savi longingly tells him that her father hasn’t come yet and she might outgrow the dress by the time he comes therefore she decided to wear it today.

Virat praises Savi’s decision and thanks Sai for allowing Savi to go to the party.

Meanwhile, the party is in full swing while Vinayak waits for Savi and Virat.

Just then Patralekha comes down dressed to nines and is praised by Bhavani, Sonali and Shivani.

Bhavani suggests that Patralekha go on a honeymoon and grace them with good news.

She also tells her that she is waiting for the day when Virat will bring his child to this house.

Just then Virat arrives at the Chavan house with Savi in his arms.

As Savi enters the house, the voice of “Shankh” is heard in the house which Ninad finds auspicious.

As Vinayak introduces Savi to Bhavani she becomes rude to Savi.

However, Savi is Sai’s daughter and aptly answers her amusing other people.

After the introductions are over, Patralekha suggests Vinayak show Savi the house while Bhavani asks Virat to get ready.

Before leaving, Virat asks Bhavani to be nice to Savi as she is just a child.

On the other hand, Sai is concerned for Savi and tells Usha that Savi will be seen as her daughter and Bhavani and others might take out their anger on her.

© Copyright tellybest.com, 2022, 2023. All Rights Reserved. Unauthorized use and/or duplication of any material from tellybest.com without written permission is strictly prohibited.
Cached Saved on: Monday 21st of November 2022 08:16:35 AMCached Disp on: Wednesday 7th of December 2022 02:48:38 PM