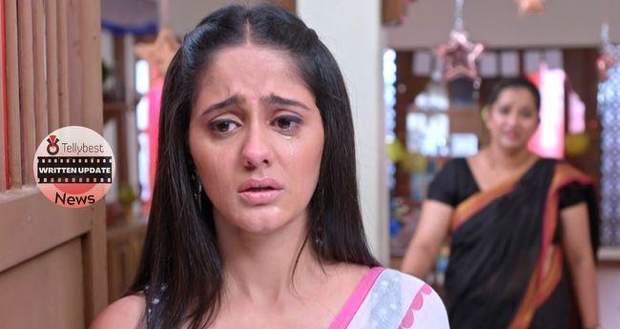 Talking about the benefits of green tea Ninad recalls Sai.

Ashwini tells him to not talk about Sai at all as she had made Virat suffer a lot. Because of her, Virat’s life often brought him close to death several times until he found Vinayak.

Meanwhile, Virat comes to apologise to Vinayak and asks him to eat his food.

Elsewhere, Savi is worrying about Vinayak too.

Seeing him browse braces, Virat questions him for losing hope whereas Vinayak tells him that there is no hope for him to get better now when he has been taken away from doctor aunty. Now he has no hope of taking part in the race also.

Virat feels sad at Vinayak’s questions and introspects himself for justifying his behavior.

Virat is angry at Sai for being alive but does not have their Vinayak with her.

However, Virat also understands that in all this Vinayak is innocent and his only hope for getting better is Sai.

Virat feels angry to see Sai alive whom he had assumed dead.

Later, Virat convinced himself that Sai has always been a good doctor and might cure Vinayak if he let her.

As Virat was introspecting, Sai calls him and tells him that he wants to talk to Vinayak’s father.

Virat is stunned to hear Sai’s voice and couldn’t speak for a while.

Ashwini comes to ask Patralekha about what is bothering her while Patralekha shows Sai's photo to her and tells her that Virat has forgotten nothing.

Ashwini counsels Patralekha not to dredge up the past but help Virat move forward when he is making every effort to do so himself.

On the other hand, Virat tells Sai that he is also about to call Savi’s mother.

However, Sai tells him that what he did today was absolutely wrong and has hurt the children badly.

Virat tells her that he also does not want to dredge his past into the present.

On being lectured by Sai for his rude behaviour toward Savi and Vinayak, Virat gets angry and tells her to keep her advice to herself and let the past rest in the past.

Hearing Virat’s anger, Sai tells him to bring Vinayak tomorrow to her clinic and she will begin her treatment and once he is cured, they will never meet again.

© Copyright tellybest.com, 2020, 2021. All Rights Reserved. Unauthorized use and/or duplication of any material from tellybest.com without written permission is strictly prohibited.
Cached Saved on: Sunday 2nd of October 2022 04:15:57 AMCached Disp on: Wednesday 5th of October 2022 06:44:12 PM