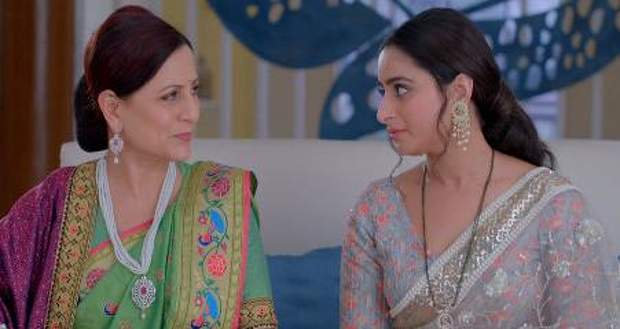 Devi tells Sai that Shivani hates Rajeev but Sai is not convinced and wants Rajeev to meet Shivani.

Later, Virat comes to Shivani asking about her sadness.

Seeing Virat’s concern for her, Shivani begins to cry while Virat goes to get water for her.

Soon, Devi comes to Shivani and unintentionally exposes Sai’s plan to her which angers her.

Virat overhears Devi and Shivani’s conversation and gets irritated at Sai’s interference.

Meanwhile, Sai comes to meet Rajeev who has prepared a very romantic welcome for Shivani.

Rajeev is disappointed to see Sai instead of Shivani and expresses his anger for being duped.

Seeing Rajeev's anger, Sai also scolds him for leaving Shivani at the alter so long ago.

Meanwhile, Virat calls Sai but she does not receive his call.

Sai explains to Rajeev that his messages and calls are hurting Shivani and if he really loved her then why did he leave.

Hearing of Shivani’s sadness, Rajeev gets hopeful about Shivani’s feelings and tells Sai that despite loving Shivani he was afraid of commitment and couldn't go through marriage then.

Rajeev tells Sai about his love for Shivani and requests Sai to arrange a meeting with her.

Afterwards, Sai questions his motive for coming back into Shivani’s life after such a long time and threatens him with jail if he again tries to hurt Shivani.

Rajeev agrees with her and begins to explain his absence for so long. He also tells her that he wants to confess his love for Shivani and apologise to her for what he has done in the past.

He also promises Sai that he will accept Shivani's decision after meeting her but begs her to let him meet Shivani once.

Sai agrees to arrange a meeting with Shivani but makes no promises about her reaction. She is about to leave when Rajeev gets slapped by Virat.

Sai is shocked to see Virat there.