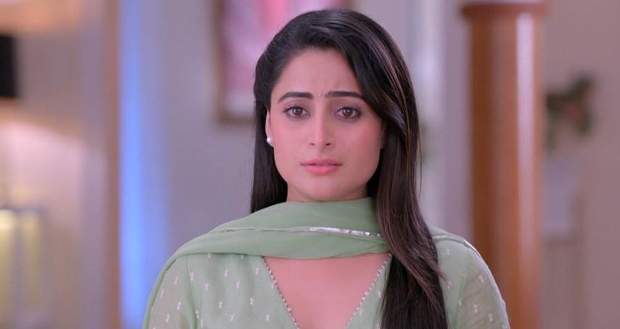 Virat brings food for her but she lies down and ignores him.

The morning after 14 days, Patralekha is playing with the baby when Sai tells her to put on the sweater on Vinayak as it is cold outside.

Patralekha argues but had to give in when he starts sneezing.

Between the arguments, Sai tells Patralekha that soon she will know how far she can go for the truth.

In the hall, the Chavan family is planning festivities around Vinayak when Patralekha comes down with Vinayak.

Just then, the police come to arrest Patralekha.

Everyone is shocked to hear about Patralekha’s arrest and asks what is happening.

Patralekha asks them who has filed a complaint against her and they tell her that it was Sai.

Sai accuses Patralekha of fraud and attacking her through goons while becoming a surrogate mother to Virat and Sai’s child.

Sai also tells them that she has gone to Geetha’s house and scared them with false forms which forced them to back out at the last minute.

Bhavani defends Patralekha saying that Sai is only taking revenge for taking Vinayak from him but she will not let it happen.

The police tell Virat that Geetha has testified against Patralekha.

Karishma is amazed to hear Patralekha has conspired against Sai.

Sai also tells them about the goons who were sent by Patralekha.

On being confirmed by Police, Virat gets angry to hear about Patralekha’s plotting and planning.

Patralekha continues to deny the allegations until Bhavani questions her point blank.

Patralekha also defends herself saying she did everything for Virat and Virat alone.

Sai tells her that she has risked their child’s life just to get her wish.

Everyone accuses Patralekha of stooping so low and trying to risk Sai’s life.

Meanwhile, Ashwini questions Bhavani for being her ally in this conspiracy while Bhavani tells them she was in the dark about Patralekha’s planning.

Later, Bhavani tells Virat that she will punish Patralekha herself and not involve the police in this as it is a matter of family reputation.

However, Sai refuses to comply saying that Pakhi will have to go to Jail.

Patralekha tries to use Vinayak as an excuse while Sai tells her that her child is her responsibility and she will take care of him herself.

Sai tells the police to take Patralekha into custody and go as no one can stop her from being arrested.