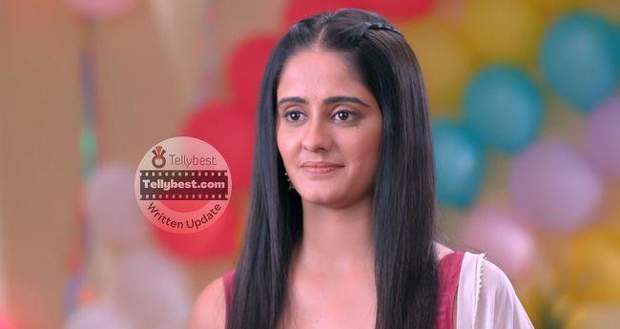 Today's Ghum Hai Kisi Ke Pyar Mein 11th December 2022 episode starts with Savi showing the sash to Sai that Patralekha has given her and tells her about the cake that has been ordered.

Savi says that she will be going to have a happening birthday today.

Later, the teacher asks everyone to play Antakshari and Savi and Vinayak insist Sai and Virat to sing but they do not look in the mood.

Then Virat sings “Na Tum Humein Jano Na Hum Tuhein Jana” and looks at Sai and then returns to Patralekha.

And then Vinayak sings “Bum Bum Bole” and the atmosphere of the bus changes from sarcastic to a happy one.

After a while, their group arrives at the picnic spot and begins to have fun.

In the meantime, Sai sees Virat and Patralekha enjoying themselves with children and thinks that if Virat had supported her a few years back instead of Patralekha then they would have had two reasons to celebrate.

She also thinks that it is good that he has forgotten about it and prays that he does not remember it at all.

Just then the cake arrives and Patralekha calls Savi to cut the cake.

However, Sai, Virat and Patralekha’s faces turn white, seeing the cake where it was written Happy Anniversary Sai and Virat.

Meanwhile, Ashwini and Ninad are installing a photo frame of Savi on the family wall when Sonali comes there and taunts Ashwini for installing the photo which she herself has removed a few days ago.

Later, Bhavani also comes there and angrily throws the photo saying that this wall is for Chavan family members only and there is no proof that Savi is family.

Seeing the photo crash, Ashwini gets angry and tells Bhavani that she will never forgive her for breaking Savi’s photo frame on her birthday.

She also tells her to not think of her great respect for her as a sign of slavery because she is not one.

On the other hand, Virat is shocked to recall that it was their anniversary and asks Patralekha why the cake has this caption.

Patralekha who is equally shocked, calls the cake shop to ask about it and is told that this has happened because of the old record.

People at the picnic begin to comment on Virat keeping his ex and current wife together and how it looks to society.

Both Sai and Patralekha feel embarrassed at this but Virat remains impervious to these comments.

Later, Patralekha rubs Sai and Virat’s names from the caption card and asks Savi to cut the cake but Savi refuses to do that as it does not have her name.

Patralekha tries to tell her that it does not matter as it is her cake only but Sai disagrees and tells Patralekha that Savi deserves to have a name on the cake.

Afterwards, Sai redresses the cake top and arranges gems in the form of Savi’s alphabet.

Meanwhile, Savi asks Virat and Sai to hold her hands while cutting the cake which makes things awkward but they do it anyway.

Savi requests Patralekha to click their family picture which she obliges with a heavy heart and tears rolling down her eyes.

© Copyright tellybest.com, 2022, 2023. All Rights Reserved. Unauthorized use and/or duplication of any material from tellybest.com without written permission is strictly prohibited.
Cached Saved on: Wednesday 25th of January 2023 09:39:12 AMCached Disp on: Thursday 2nd of February 2023 07:53:37 PM