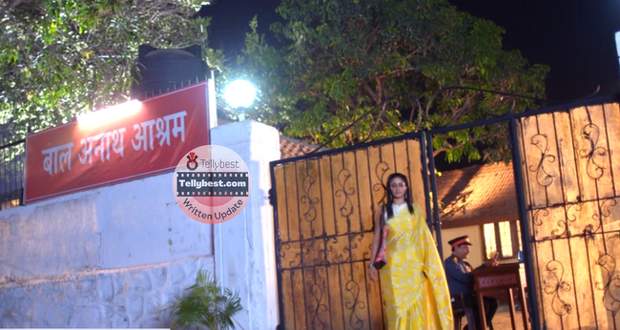 Today's Ghum Hai Kisi Ke Pyar Mein 11th January 2023 episode starts with Sai quickly putting the glasses in the window so that the guard does not see her.

Afterwards, Sai comes to the warden’s room, opens the computer and looks for the password which she soon finds written on the keyboard.

Meanwhile, the guard finds the broken glass with fresh blood on it and comes to investigate.

After a while, Sai is trying to search the folders with Baby Vinayak’s information when she hears the door rattle.

Meanwhile, Virat and Ashwini happily congratulate Shivani on the good news while Shivani shyly accepts their wishes telling them that Rajeev wants to wait for three months to disclose the news.

However, Bhavani gets angry and shames Shivani for becoming pregnant at this age when Mohit and Virat should be fathers.

Shivani’s smiling face droops upon hearing Bhavani and asks her what her problem is.

She accuses Bhavani of not being happy with her good news and unintentionally drags Patralekha into the conversation by calling her infertile.

Patralekha feels hurt and leaves the table while Shivani apologises to Virat.

Meanwhile, the guard comes to the warden's room with a member of staff looking for the intruder while Sai hides behind the table.

However, bloodspots on the floor give Sai away.

Elsewhere, Virat comes after Patralekha and tells her to come back to the table and not feel bad as Shivani does not mean it.

Patralekha shares with Virat how every happiness that she tries to grab with both her hands slips away like sand no matter how tight she tries to hold.

Virat tries to comfort her saying she is not alone and they all are there with her and she also has Vinayak.

However, Patralekha tells her that he is her husband in name only and there is no marital bond between them as he regrets letting Sai go on that fateful day.

Virat denies Patralekha but just then his phone rings.

On hearing about Sai’s misdemeanour in trying to steal the orphanage’s data, Virat gets shocked and immediately leaves.

Patralekha looks at Virat suspiciously hearing Virat’s name while Virat rushes out without giving her a second glance.

Patralekha tells Virat that by leaving her behind on Sai’s one phone call he has given her his answer.

Sai tells Virat she had gone there searching for information about their baby Vinayak.

Virat pretends ignorance while Sai tells her the whole story about her struggle in finding the information and as a last resort comes here.

She tells Virat that she did not want to worry him knowing his family problems but now she needs his help in searching for baby Vinayak.

Virat thinks about his reasons for keeping Sai from finding Vinayak and tells her that he will talk to Anandi once she returns from her trip.

Sai prays to God to lead them to their baby Vinayak.

Virat looks at Sai’s wound and patches it while Sai hopes that by finding Vinayak they will be able to put their bitterness for each other behind and will feel fulfilled.

However, Virat prays for strength for Sai as he will never let Sai find out about Vinayak.

Later, Virat returns home and lies to Patralekha about meeting Sai but Patralekha sees right through him.