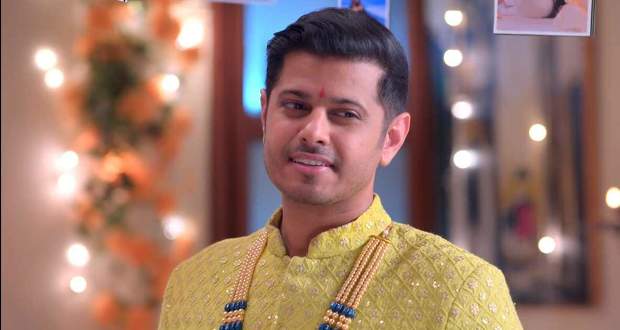 Today's Ghum Hai Kisi Ke Pyar Mein 11th May 2022 episode starts with Sai telling Virat that their special day is spoiled due to one question.

Virat holds Sai’s chin in his hand and assures her of his love.

Asking Sai to have faith in him, he tells her that together they will face every problem.

Virat also tells Sai that the thought of losing her after her grand confession, made him lie to Bhavani.

Sai kisses Virat on his forehead and tells him that she will always be by his side no matter what.

Turning the atmosphere romantic, Virat asks Sai to focus on their wedding night for now.

All of Sai’s boldness disappears with Virat looks at her lovingly and she smiles shyly at Virat’s suggestion.

Virat pulls Sai closer while she veils her eyes at his closeness but stops him midway as he bends to kiss her.

Sai tells him that they will have to wait until things clear out with Bhavani.

Releasing a sigh, Virat tells her that his love for her is so profound that he can wait forever.

The next morning, Ashwini is overjoyed to see Virat at the dining table.

Seeing her coming out of the kitchen makes Bhavani happy and she tells her that today everyone will make her feel welcome.

Later, Virat distracts Sai from telling Bhavani the truth by serving her breakfast.

Later, Shivani suggests to Virat to go on a honeymoon together.

However, Bhavani scolds her telling her that they do not have this tradition in their family and tells them that she has other plans for Sai and Virat.