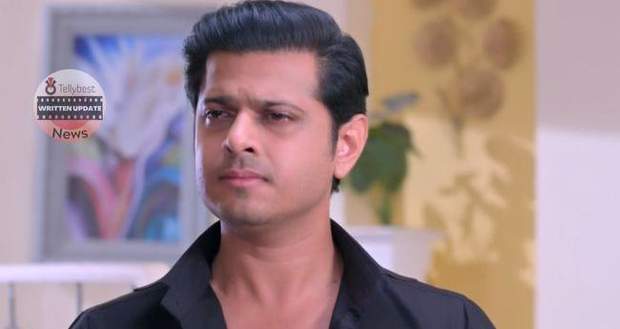 Today's Ghum Hai Kisi Ke Pyar Mein 11th November 2022 episode starts with Patralekha telling Virat that she is not comfortable with this FIR and the police.

However, Virat tells Patralekha that Sai deserve more than this for what she has done.

Usha tells Sai that Savi has left her phone at home only.

On being asked, Usha tells Sai that she has sought the help of Jagthap and has come to a place where they used to live before.

Sai is annoyed at Usha for involving Jagthap who is responsible for all this mess.

Later, Sai requests the constable to make another call and calls Vinayak.

Meanwhile, Virat is trying to make both children sleep and sings a lullaby for them.

Later, Virat sees Sai calling Vinayak’s number and blocks it out of anger.

Sai is disheartened to see herself blocked and wonders how low will Virat stoop.

Later, Virat calls the police officer to take back Sai’s phone as she is calling his house.

After a while, Sai shouts in anger telling the police officer that Virat is in the wrong and he cannot take away her daughter from her despite locking her here.

Later, Sai pushes past the officer and uses the police gun to escape the police station.

Meanwhile, Ninad and Ashwini are happy to see Virat together with his children.

However, Ashwini feels sad about Patralekha who is going through a thunderstorm.

Ninad also admires the happy and content face of Virat who is feeling proud to have Savi as his daughter.

Later, Ninad and Ashwini see Patralekha sitting quietly at the table lost in her thoughts.

Meanwhile, the police officer tells Sai to put down the gun otherwise she will lock her in the lockup.

Sai tells them to call Virat and asks him to bring her daughter here.

However, the police officer tells her that Virat does not take orders from the junior officer and he is their boss.

Sai tells them to let her make a call and only then will she return the gun.

Later, Sai makes a call and tells someone to come fast as she is in a grave problem and only he can help her.

Meanwhile, Ashwini and Ninad come to Patralekha who is behaving out of sorts.

Ashwini holds her tightly and tells her not to let her trust in Virat dwindle while Patralekha cries out while hugging Ashwini.

Meanwhile, commissioner Sir comes to the police station and is shocked to see Sai in custody.

Hearing how Virat manipulated Savi and how Sai took illegal action against the police makes the commissioner worried. Sai tells Commissioner that Virat is using his power to keep Savi.

Sai tells him that she was forced to behave unlawfully because her daughter has been taken away from her and no one is telling her about her as well.

Commissioner sir suggests sitting and talking with Virat but Sai tells him that she cannot afford to lose her daughter and she will go to any length to get her even if she has to break into and enter Virat’s house.

© Copyright tellybest.com, 2022, 2023. All Rights Reserved. Unauthorized use and/or duplication of any material from tellybest.com without written permission is strictly prohibited.
Cached Saved on: Monday 21st of November 2022 07:58:04 AMCached Disp on: Thursday 1st of December 2022 03:20:15 AM