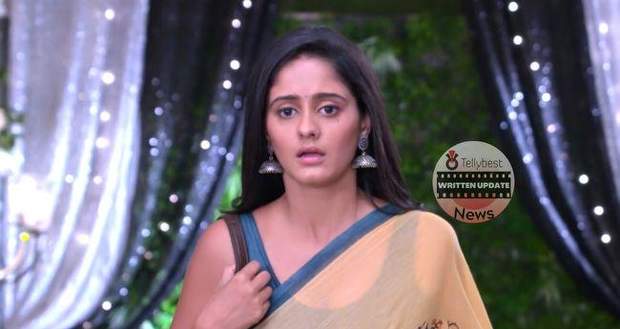 On being asked, Virat tells Patralekha about Sai not wanting to send Savi to the party.

Patralekha tells Virat that it must not be easy for Sai to allow Savi to come to their anniversary party.

However, Virat tells her that he wants to be entirely available for the party and does not want to have any negative thoughts tonight.

Meanwhile, Vinayak shows Savi her house and asks Virat if in future they will have the party on the terrace with Savi and Sai.

Virat becomes nostalgic at Vinayak's request remembering Sai partying with him at the same place.

Later, Vinayak asks Virat to give Savi her surprise gift.

After a while, Savi, Virat, Patralekha and Vinayak come down after getting ready.

Bhavani wishes Patralekha and Virat a happy anniversary and invites her to cut the cake.

Sonali tells Bhavani that Sai should know what she has lost.

After a while, Bhavani makes a speech about Patralekha and praises her as a daughter-in-law, wife, and mother and prays for Virat and Patralekha to be together forever.

Just then, Savi is about to touch the cake when Bhavani sternly stops her.

Virat also realises his mistake and apologises to Patralekha.

However, Bhavani and Sonali get furious and Sonali blames Savi for spoiling the fun of the party just like her mother.

Meanwhile, Usha tries to stop Sai from going to Chavan's house but Sai is not ready to leave Savi among the Chavan who might hurt her.

On the other hand, Virat takes Patralekha's hand and they cut the cake again.

Later, Virat asks Patralekha to tell him how he can make up for the mishap he caused on this special day.

Seeing Patralekha hesitate, Ashwini tells Virat to dance with Patralekha to compensate for breaking her heart.

As Virat and Patralekha are about to begin the dancing, Harinee makes a comment about Sai making Virat pause.

To let the awkward moment pass, Shivani gives a red rose to Virat to present to Patralekha on their anniversary.

Virat looks at the flower and recalls various moments in the past when he has given roses to Sai.

Forcing himself out of the painful memories, Virat takes the flower to present to Patralekha.

Just then, Sai’s voice calling for Savi stops him again.

© Copyright tellybest.com, 2022, 2023. All Rights Reserved. Unauthorized use and/or duplication of any material from tellybest.com without written permission is strictly prohibited.
Cached Saved on: Monday 21st of November 2022 03:54:39 AMCached Disp on: Thursday 1st of December 2022 11:41:00 AM