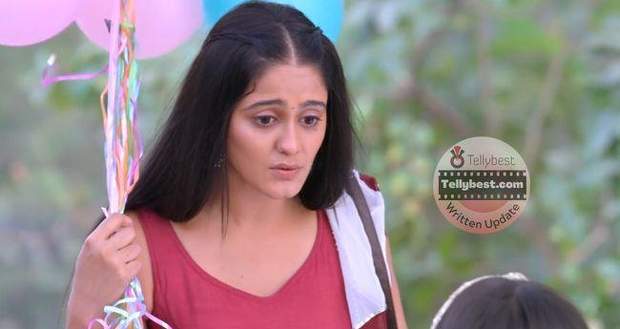 Today's Ghum Hai Kisi Ke Pyar Mein 12th December 2022 episode starts with Ninad trying to appease Bhavani to not get angry at Ashwini and tells her that although Ashwini is not wrong yet her way of saying it definitely is.

Meanwhile, Bhavani tells Ninad to ask his wife to understand how Patralekha will feel when Sai and Savi will come there.

Just then Ashwini comes there saying that Patralekha will not mind them celebrating Savi’s birthday there as she finds happiness in Virat’s happiness which is in Savi's.

Bhavani challenges Ashwini to call Patralekha and ask her right away.

Meanwhile, Savi asks Sai for a crown and Sai tells her that she will get one when they will be back at home.

Just then Virat calls Savi and marks her height on his coat to remember her growth and tells her that now he will mark it every year.

Meanwhile, Vinayak also comes there and asks Virat to mark his height as well which makes Virat suggest they have a competition with each other who grows bigger fast and stay tall.

After Vinayak and Savi finishes bantering with each other, Virat asks Savi what she wants as a gift while Savi tells him that every year before this her father use to send gift and cake to her but this year she has her own father and she does not need anything anymore.

Virat feels grateful to Sai for keeping him present and alive in Savi’s life all those years ago.

Later Savi asks Virat to always celebrate her birthday with her from now on with Sai and Vinayak.

In the meantime, Ashwini calls Patralekha to ask her permission to celebrate Savi’s birthday.

Patralekha already feels sad and tells Ashwini that there is no need to ask permission and they have two reasons for the celebration as it is also Sai and Virat’s anniversary.

Ashwini is shocked to hear that while Patralekha begins to cry while Ashwini gets worried to hear her sob.

Sonali tells her that a person expresses his pain of heart through her tears and that is what Patralekha is doing as well.

Later, Bhavani accuses Sai of knowing exactly how well to play her cards.

Later, Virat comes to Sai to thank her for keeping him alive in Savi’s life however Sai tells him that she did that because she does not want Savi to feel deprived of her father but this decision has nothing to do with him.

On being apologised by Virat for forgetting their anniversary, Sai tells him that there is nothing to remember as their relationship ended on a painful note.

She calls this day accursed for bringing her into his life and wishes that it would have been so good if they never knew each other.

Later, the school is playing games with parents compatibility where Patralekha and Virat are also selected through chit.

Patralekha is surprised to see Virat give all the correct answers related to her and asks the principal to let them quit when they are ahead or else Virat might make her lose the game.

However, seeing Virat hurt she realises what she has said and feels sad.

© Copyright tellybest.com, 2022, 2023. All Rights Reserved. Unauthorized use and/or duplication of any material from tellybest.com without written permission is strictly prohibited.
Cached Saved on: Wednesday 25th of January 2023 05:24:46 PMCached Disp on: Sunday 5th of February 2023 03:19:44 AM