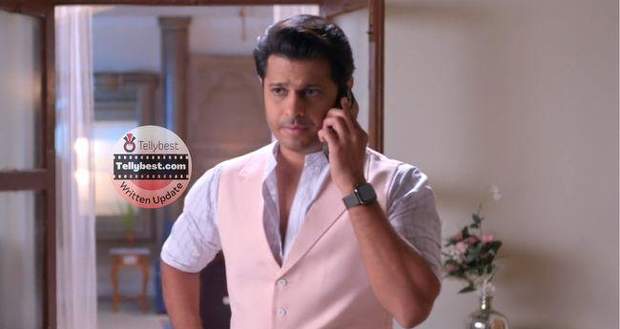 He tells Vinayak that his father has become a liar and lies to his mother and Patralekha as he cannot risk telling them about Vinayak being the baby Vinayak.

Virat curses fate for playing a game with him that he cannot even celebrate the newfound truth that he is not his adopted son but a real son whom he has lost years ago.

Just then Vinayak wakes up with a start and tells Virat that he has seen Sai crying a lot while calling for him but could not hear him when he told her that he is right in front of him.

Virat feels sad knowing that Vinayak’s dream is so close to reality.

After Vinayak goes back to sleep, Virat apologises for not telling him that Sai is his real mother.

The next morning, Sai is taking Savi to school, looking preoccupied and continuously watching her phone waiting for Virat’s call.

At the school, Vinayak comes running to Sai and tells her about coming with Patralekha and also describes his dream to her.

Later, Sai asks Patralekha why is she here when she should be resting at home.

However, Patralekha tells her about needing fresh air and asks Sai how she got hurt as she had a bandage on her hand.

On being told a half-truth, Patralekha asks her confidently if Virat has bandaged her hand because he does not know how to do it.

Sai is saved from answering the question as Virat calls her and tells her to meet at the nearby cafe as he has found something about the kid.

At the cafe, Virat misguides Sai telling him about Mrs and Mr Shishadri’s adopted son and showing him a photo of that child.

Sai assumes her to be their Vinayak but Virat shows Sai the child's birthmark and tells her about the bracelet that this kid had at the time of adoption.

He tells her that he is a victim of a car accident which collided with a bus going from Nagpur and Garchiroli.

Just then an aquarium bursts which stuns Sai and she quickly rushes to it with a vase full of water and begins to fill the fish in it like mad.

Virat tells Sai to have a grip on herself, but Sai's cries gains speed and she asks him why she is made to suffer the same pain of losing Vinayak once more.

She questions Virat if God has no mercy for her or if he thinks she is made of stone and feels no pain.

Seeing Sai going through pain makes Virat guilty for keeping the truth from her while Sai hugs him asking him why he had not stopped her from leaving. If he had then their Veenu would have been with them.

Virat hugs Sai back, needing comfort and letting Sai have his shoulder, if not the truth, so she can cry as much as she likes at losing her baby once again.

However, Patralekha who has just arrived near the cafe sees Virat and Sai hugging each other.