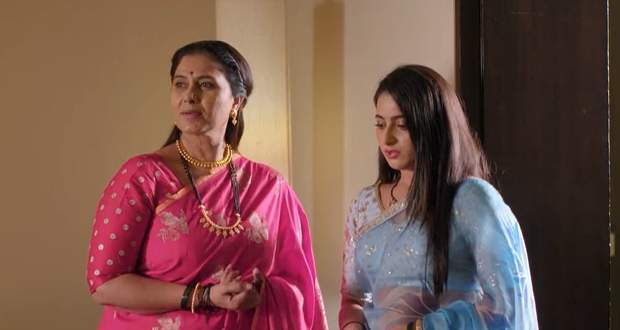 Elsewhere, Sai and Virat try to eat but remember their words spoken to each other.

Later, Ninad taunts Ashwini while she says that she should also confront him and Bhavani in front of everyone like Sai.

Ninad warns her to not cross her limits as he will send her where she came from.

Sunny calls Virat who disconnects the call after a short conversation about Sai while Ashwini comes to meet Virat.

Elsewhere, Sai speaks of Virat in sleep while Harini says that she'll call him but Sai stops her and messages him to take his medicines.

Virat gets happy while Ashwini encourages him to call her.

He calls her but gets angry at her phone is switched off.

However, Ashwini tells him that she already knew about him and Pakhi while makes him understand why Sai reacted.

Suddenly, Pakhi comes there and asks Virat about his check-up.

Ashwini questions Pakhi why she is interested in Virat even after him being married and makes her leave.

© Copyright tellybest.com, 2020, 2021. All Rights Reserved. Unauthorized use and/or duplication of any material from tellybest.com without written permission is strictly prohibited.
Cached Saved on: Monday 1st of August 2022 12:20:46 PMCached Disp on: Thursday 11th of August 2022 05:17:44 AM