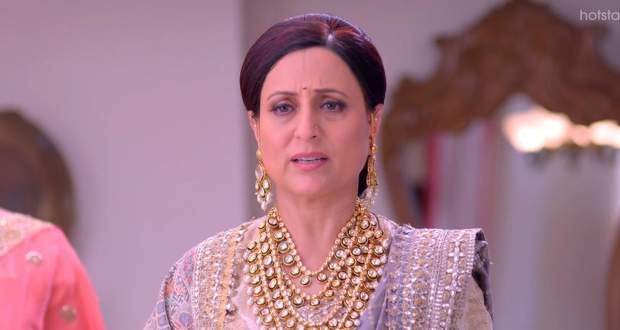 Today's Ghum Hai Kisi Ke Pyar Mein 12th May 2022 episode starts with Bhavani telling Shivani that nobody goes on honeymoon in their family.

Bhavani also tells them that all the couples will go to 'Kuldevi's Mandir' to get the blessings.

Sai is not too pleased to hear this announcement and tries to come clean to Bhavani but Virat stops her.

In their room, Virat is happy that Bhavani is treating them with the deference that they deserve as a couple however, Sai tells him that this is all an illusion which will dissolve as soon as Bhavani finds out the truth.

Virat and Sai argue about keeping the truth from Bhavani when she comes in.

Bhavani presents Sai with her mother-in-law's saree to wear for her visit to Mandir.

Sai is under the burden of deception and couldn’t enjoy the honour that is bestowed on her as the eldest daughter-in-law of the house.

Later, Bhavani declares that she will help Sai get ready and asks Virat to go out.

While helping Sai, Bhavani also talks to Sai about the responsibilities and duties that she has inherited as the eldest ‘Bahu’ of the house.

Sai again tries to tell Bhavani about Virat’s lie but Bhavani stops her and tells her that she will train Sai to take her place in the future.

Sai is overwhelmed by Bhavani’s talk and once again tries to tell her but Virat interrupts her.

Sai asks Virat to tell Bhavani before it's too late but Virat guilts her into silence.

Afterwards, Karishma praises Sai’s saree while Bhavani tells her that this is an honour that is earned.

Patralekha tries to opt-out of the trip by saying that Samrat is not the son of the house but Bhavani insists on it.

Later, Omi asks everyone to start moving or they will get late.