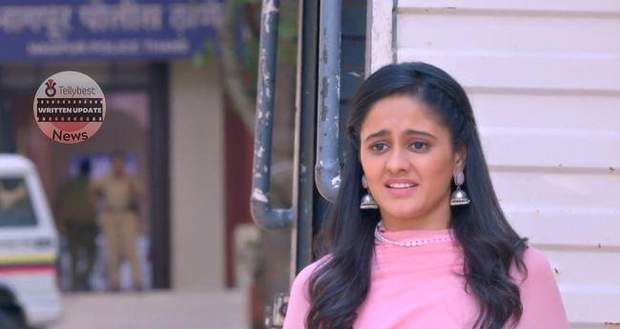 Today's Ghum Hai Kisi Ke Pyar Mein 12th November 2022 episode starts with Virat waking up with a start hearing Savi’s cry of pain as her foot collides with the door while Sai takes her away.

Thinking that it was just a dream, Virat turns to comfort Savi but couldn’t find her on the bed.

Patralekha who has slept on the sofa wakes up hearing Virat while other members also gather around.

Virat is about to go to Jagthap when Savi’s voice stops him.

Telling Virat that she has been in the bathroom, Savi tells him that she had a bad dream about Sai and doesn’t feel good about it.

Seeing Savi cry for Sai, Virat sings a lullaby to calm her and takes her to her bedroom.

Just then Ninad comes to tell Virat that commissioner sir has been calling him.

Commissioner scolds him for putting Sai in jail and asks him to come here.

After a while, Virat comes to the police station where Sai eagerly asks him about Savi and tells him to not tell Savi that he is her father.

Virat tells her to stop giving him lectures because he knows very well what is best for Savi.

Commissioner sir scolds them both for arguing like children.

Seeing the commissioner sympathise with Sai, Virat tells him that Sai is guilty of keeping his daughter a secret for all these years.

He calls Sai a liar who has been lying to her ex-husband as well as her daughter who is yearning for her father.

Sai explodes in anger and tells Virat that she has not told Savi about him because she does not want her to have a father like him.

Telling him that he does not deserve to be a father she tells Virat that he should be ashamed of himself for separating a mother and daughter using his powers.

Virat gets angry and tells Sai that it is she who should feel ashamed of keeping a father and daughter separate for years.

However, Virat tells him that he has already lodged an FIR against her and tells her that she will have to stay here because of the FIR.

Commissioner sir tries to make Virat see reason but he tells him to not come between a mother and father and that he will see Sai in court.

Afterwards, commissioner sir tells Sai to follow the legal channels to get hold of Saavi and that he will arrange her bail through his lawyer.

Sai tells him that she cannot wait that long but Virat tells her that there is no other option but to be patient.

In the meantime, Ashwini comes to wake Vinayak and bends on Savi to admire her as her granddaughter.

Meanwhile, Ninad shames Virat for putting Sai in Jail and questions him about considering Savi’s feelings and how she would react knowing her father has sent her mother to jail.

Virat tells Ninad to see him as a father who has been wronged and reminds him of his fatherly love for him when he kept him from going to school after coming home after long gaps.

Later, seeing Virat organise everything for Savi, Patralekha asks him about doing something for Vinayak.

© Copyright tellybest.com, 2022, 2023. All Rights Reserved. Unauthorized use and/or duplication of any material from tellybest.com without written permission is strictly prohibited.
Cached Saved on: Monday 21st of November 2022 01:36:41 AMCached Disp on: Wednesday 7th of December 2022 02:34:07 PM