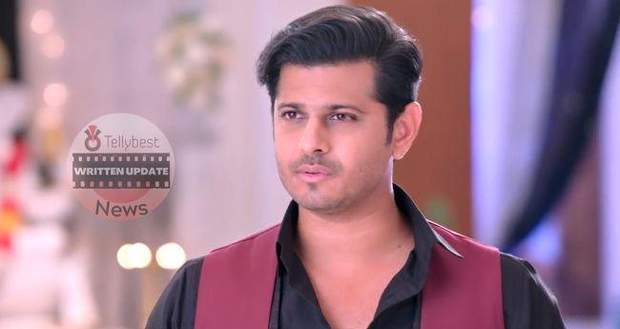 Everyone is shocked to see Sai at the Chavan house.

Bhavani wonders about Sai's presence in the house and goes to deal with her while stopping Virat from going to Sai.

Meanwhile, Virat accuses Sai of not trusting him with her daughter.

At the same time, Bhavani sternly questions Sai's reasons for coming to their house.

Sai shames Bhavani for taking out her anger on a small child like Savi.

Meanwhile, Patralekha tells Virat that Sai is justified to have fears for her daughter when he acts equally possessive about Vinayak.

Virat denies acting like Sai while Patralekha reminds him of his worry about Vinayak whenever he goes on a trip.

In the meantime, Sai tells Bhavani that she is here to take Savi back home when she is being insulted here.

Just then, Savi comes running to Sai and tells her that she is having a whale of a time.

Vinayak also tells Sai to come and enjoy the refreshments at the party.

However, Sai tells Savi to come with her.

Savi refuses to go saying that the party has just started and she wants to see everyone dance.

Bhavani observes guests turning to them and asks Sai to join the party since she is here.

Sai thinks on the matter for a while and comes inside reliving her past memories.

Seeing Sai come inside, Virat complains to Patralekha for letting Sai in.

Patralekha tells him that Sai is doing everything for Savi just like he went to Sai’s house to get Savi for Vinayak's sake.

She also tells Virat to treat Sai as Vinayak’s doctor and not get affected by her.

Meanwhile, Ashwini questions Bhavani about letting Sai in the house.

However, Bhavani tells her that she cannot let her reputation on the line with so many guests in the house.

After a while, Sai takes permission from Bhavani to go to Savi who has vanished inside the house.

At the terrace, Sai tells Savi that she is behaving badly with her mother and that she should listen to her.

Savi on the other hand reminds Sai that she is also trying to take away her pleasure of being at the party.

Meanwhile, Sonali expresses her concern for Sai making a spectacle in front of guests.

However, Bhavani tells her that she has purposely allowed Sai in the house so that she can show her Virat and Patralekha are happy with each other and she has no place in this house.

© Copyright tellybest.com, 2022, 2023. All Rights Reserved. Unauthorized use and/or duplication of any material from tellybest.com without written permission is strictly prohibited.
Cached Saved on: Monday 21st of November 2022 12:50:56 AMCached Disp on: Saturday 10th of December 2022 02:15:53 PM