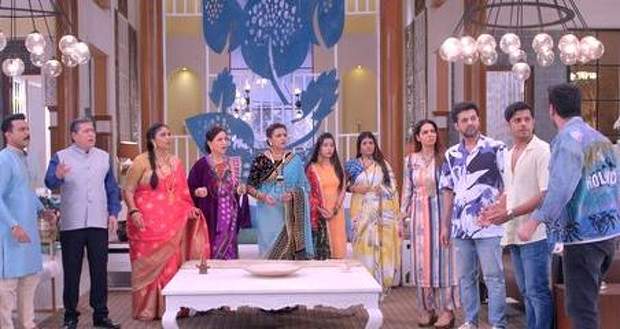 Today's Ghum Hai Kisi Ke Pyar Mein 13th August 2022 episode starts with Virat coming to the DM office where DM Vyas questions him about not reporting the incident of surrogacy to the police after it was done.

Virat tells them that at the time his only concern was to get the process done as it was his last hope of becoming a father.

DIG sir tells Virat that his action has disappointed him and there will be an enquiry about this case.

DM Vyas tells Virat that during the time of inquiry he will remain suspended.

Meanwhile, Patralekha is crying in the jail cell and introspecting the decisions that have brought her to jail and she is left with nothing.

After a while, Virat comes home looking dejected.

On being asked, Virat hands over his suspension letter to Ninad to read who is shocked to read that Virat has been suspended.

Virat tells everyone that he did not report the incident of Patralekha and Bhavani changing the surrogate to the police nor did he stop them.

Bhavani accuses Sai of Virat’s suspension saying it is due to Sai’s complaint against Patralekha that Virat is suspended.

However, Virat tells Sai that it was he who is in the wrong for not taking action or reporting the matter afterwards in his desire to get his child.

Later, Virat is feeling remorse for his negligence and failing to do his duty.

Virat tells Sai that he feels ashamed of what he did and he has also put his reputation at risk while forgetting to do his duty.

Meanwhile, Vaishali comes to visit Patralekha and assures her that soon she will get her out of the jail and request Sai to take the case back.

Patralekha tells Vaishali that she is getting what she deserves and asks her to not bother to get her bail.

Just then Vaishali gets the call from her husband saying that lawyers have refused to take the case.

In the meantime, Bhavani asks Sai to take the case back so that Virat also gets reinstated.

However, Ninad tells her that Sai’s complaint will not affect Virat’s enquiry.

Just then Sonali tells Bhavani that lawyers have refused to take Patralekha’s case.

Sai also refused to take back her complaint against Patralekha for putting her child at risk.

Sai also tells everyone about Patralekha’s challenge of taking Vinayak away from her and she succeeded in that too.

Bhavani does not believe in Sai while Sai tells her that she will not prove herself right nor will she take her complaint back.

© Copyright tellybest.com, 2020, 2021. All Rights Reserved. Unauthorized use and/or duplication of any material from tellybest.com without written permission is strictly prohibited.
Cached Saved on: Sunday 2nd of October 2022 07:53:12 AMCached Disp on: Thursday 6th of October 2022 03:09:56 PM