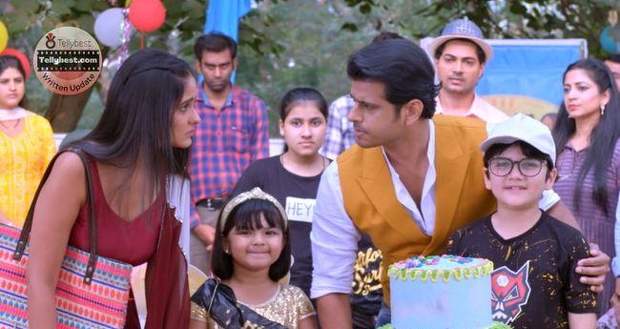 However, Virat insists on taking the questions as he thinks he knows Patralekha very well which proves wrong with the first question which is about colour.

Everyone hoots him for answering wrong and he keeps giving the wrong answer except for two questions.

Patralekha feels bad at being mocked by Virat for not knowing about her while Virat tells her to not take it so seriously as it is just a game.

Bhavani accuses Sai of using Savi to bait Virat in the guise of Savi’s birthday which could not be the same as their anniversary.

Ninad is not convinced that Sai will stoop so low but Bhavani tells them that this is Sai’s way to trick them to trap them all just like she claims Savi to be Virat’s daughter.

She tells them that Sai's ambition in life is to ruin Virat and she is doing just that.

Meanwhile, Ashwini tells Ninad that she has to go to Patralekha as she is in need of a crying shoulder else she will suffocate herself.

Ninad tries to convince her otherwise but Ashwini tells them that Patralekha is her daughter and needs her and she wants to go there to comfort her.

Later, the principal takes another chit as they have no clear winner yet and Savi’s parent’s name is called.

Savi gets excited to hear her parent’s names while Patralekha, Virat and Sai become awkward.

Patralekha tells Virat to not play as it will look too embarrassing for them all.

Sai also tells Savi that they cannot participate in this as they are not a normal couple.

However, Savi begins to cry and asks Virat that she wants that crown as a birthday gift.

Parents also begin to make fun of the situation which angers Virat and he asks Sai to participate for Savi’s sake.

Patralekha tries to stop him but Virat emotively tells her that he wants Savi to get her wish as it is her first birthday together with him.

After a while, Vinayak tells Savi that Virat and Sai will definitely lose this game as they wouldn’t know anything about each other.

However, he cannot be more wrong as all their answers match each other.

Savi’s teacher asks Sai what is her nickname for Virat.

Sai thinks to give the wrong answer but Savi’s request to win the crown for her stops her.

Later, both Virat and Sai get engrossed in the game and forget about Patralekha's feelings who feel torn seeing them together and getting answers right.

Meanwhile, Patralekha's hurt intensifies with each right answer and a tear drops from her eyes while she witnesses the perfect compatibility score between the two.

© Copyright tellybest.com, 2022, 2023. All Rights Reserved. Unauthorized use and/or duplication of any material from tellybest.com without written permission is strictly prohibited.
Cached Saved on: Wednesday 25th of January 2023 08:16:09 PMCached Disp on: Sunday 5th of February 2023 03:30:58 AM